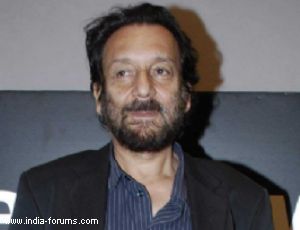 Can you shoot a video on your phone? If yes, you're a filmmaker, says Shekhar Kapoor, who feels technology has made filmmaking an easier form of art.

"Filmmaking is a different ballgame now altogether. You can upload your videos and get as many as 75 million hits. That's probably not a figure one can even reach through theatres. There are only about 12,000 theatres in India. So filmmaking, I believe, is undergoing change and it is losing its iconic identity," Kapoor said here.

The acclaimed filmmaker made his directorial debut in 1983 with "Masoom", and gradually helmed projects like "Bandit Queen", "Mr. India" and "Elizabeth".

He had no formal training in movie making, but says he had the "passion".

"Making a film used to be a big thing in my times. It was about shooting on 35 mm, it was about collecting film stock to shoot anything, and about approaching distributors and theatres for screening the film.

"Today, if you want to be a filmmaker, you can just be one with a phone! You don't need the infrastructure, you have it ready in some form or the other... Luckily, there's somebody who has given the infrastructure to the current generation in the form of technology. So use that," he added.

Kapur motivated young, aspiring filmmakers at the ongoing 12th Osian's-Cinefan Film Festival here Tuesday, to follow their passion for movies with a vengeance, and by cashing in on all available resources.

"There is no problem in making a film. If you have a story to tell, you can do it even if you have a phone which takes video, there's no problem! But yes, if you want your film to make Rs.100 crore, then you have a big problem," said the 66-year-old.