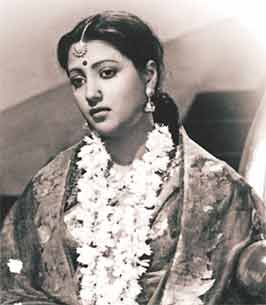 Raima Sen, who bears a strong resemblance to her late grandmother and legendary Bengali actress Suchitra Sen, says initially filmmakers tried to portray her like her granny and it took her a long time to get out of her shadows.

"Initially, when I came into the industry, everyone would look at me in that funny way as if they were not seeing me, but someone else. When I was doing my first film 'Godmother', I'd be told to look into the camera in a certain way. It took me a while to realise they were seeing my grandmother in me," said Raima.

She feels that late filmmaker Rituparno Ghosh's "Chokher Bali" helped her come into her own.

"Everything to do with me was about my grandmother. They just loved me because I looked like her. It took me a long time to get out of her shadows. After Rituda's 'Chokher Bali', the comparisons stopped," said Raima.

"But she did watch me in Aniruddha Roy Chowdhury's 'Anuranan'. She had never watched any film of mine before that. After 'Anuranan', she wanted to see more of my films. I gave her Rituda's 'Nauka Dubi'. She liked that too," said Raima.

"As for me, I think she was awesome in all her films specially 'Saat Pake Bandha', 'Uttar Phalguni', 'Mamta', 'Aandhi' and 'Dweep Jwale Jaye'... Her screen presence is unmatchable, at least in Bengali cinema," she added.

She says Ghosh was keen to make a biopic on Sen.