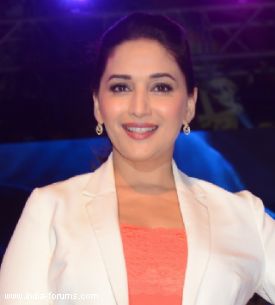 In the three decades that Madhuri Dixit has dedicated to entertaining Hindi film buffs, the hugely talented and enduringly beautiful actress saw herself evolve as a performer and as a person. She feels that the new crop of artistes in filmdom comes prepared to handle the increasing "pressures" in a more organised industry.

"The industry is more organized now, but of course, there is too much pressure and people are less forgiving. The new generation is completely prepared and they are well-groomed today...that was not there before," Madhuri told IANS in an interview here.

"We started and learned (the art) as we worked. But today, the new actors are confident. It is wonderful. Of course, there is a lot of pressure to deliver good performance," she added.

During her prime, Madhuri was compared to many of her contemporaries, but she "can't say if the competition has become bitter now".

"It's a creative world. Everybody is doing what they do best and they are trying to make their space. It's not that just one person is going to dominate the industry because in that case, we would not have had names like Madhubala, Meena Kumari ji, Nargis Dutt ji...all of them were shining at the same time," the 46-year-old thespian and dancer said.

After having started an acting career with the 1984 film "Abodh", Madhuri went on to cement her space in Hindi movies with entertainers like "Tezaab", "Ram Lakhan", "Tridev", "Parinda", "Dil", "Sailaab", "Khalnayak", "Hum Aapke Hain Kaun" and "Dil To Pagal Hai".

If acting came naturally to her, it was her fluid dancing skills, elegance, enigmatic smile and her charismatic personality which were a bonus for her. She got plum roles in with the best of banners, directors and actors. And she continues to court them.

But she remains as grounded as ever. How?

"This credit goes to my parents because of the way they have brought me up...their values. My mother has always stood by me and even through all the ups and downs, she always had encouraging words to say to me.

"Even after marriage, I found a family where my in-laws have a thinking like my parents," said the actress, who married Sriram Nene, a US-based doctor, in 1999.

She says even though she was treated like a star everywhere she went, "I always had a reality check at home waiting for me".

"I am an actress and I have so many fans who adore me. But when I go home, I am a mother, daughter, wife...and I forget everything else," said the mother of two boys.

After her wedding, Madhuri had shifted base to Denver, and she gave the big screen a miss to realise her dream of having a family and children.

"I had never dreamt to be an actress, but when I became one I wanted to be the best. I wanted to dance and act the best, but that was on the professional level. On the personal front, having a family, kids... it was a big part of my dream because I come from a big family," said the doting mother.

She says visiting glitzy Bollywood parties that are a norm for actors was a pain for her.

"I never liked it. It was a baggage which I had to carry with me. But this (having a happy family) was something that I always wanted. When I was in Denver and raising my kids, it was part of the dream I was living," said the actress, who will soon be seen in "Gulaab Gang", perhaps a career defining role in which she portrays the leader of a gang that fights for women's rights.

(Uma Ramasubramanian can be contacted at uma.sagit@gmail.com)