Jaipur, Jan 21 (IANS) Dressed in bright clothes, 50 couples renewed their vows in the lawns of the royal Taj Rambagh Palace here as part of an entertainment channel's attempt to promote its new show.

Building on the premise of their newly launched show 'Yeh Rishta Kya Kehlata Hai', which is based on the concept of falling in love after an arranged marriage, STAR Plus held a countrywide contest among over 1,000 married couples to test the strength of their bond.

The couples were very excited about the concept.

'We have been married for nine years now and it is so nice to go through all those rituals again. After this, I feel like going on a honeymoon once again,' quipped Alpesh Dave, who travelled all the way from Ahmedabad with his wife to be at the event.

The fifty couples were selected through compatibility quizzes held in Delhi, Ahmedabad, Indore, Lucknow, Ludhiana and Mumbai, apart from on-air tests held through the radio station Big 92.7 FM across 32 cities.

The event at the Pink City Tuesday was a culmination of the contest.

Grooms walked in amid a colourful marriage procession with dancers swaying to the tunes of traditional Rajasthani beats. As they took their seat at their respective mandaps (marquees), their brides walked in too. The couples exchanged garlands while a group of priests chanted Sanskrit shlokas. To complete the ceremony, the grooms put sindoor (traditional vermillion) on their bride's forehead.

There were several games that were arranged for the couples. A 'ghoomar' (traditional Rajasthani women's folk dance) performance by local artistes followed. The couples were also given a unique photo opportunity atop a horse-drawn chariot that read 'Just Married'.

'The show is very traditional and an endearing concept with the central idea of finding love in an arranged marriage. This was an opportunity for these 50 couples to renew their marriage vows and revisit their magic moments when they were first bound in matrimony,' said Anupam Vasudev, executive vice president, marketing, STAR Plus. 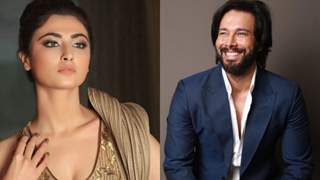