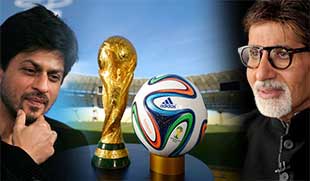 From megastar Amitabh Bachchan to superstar Shah Rukh Khan - the Hindi film fraternity is glued to their TV sets to catch the excitement of 2014 FIFA World Cup Brazil.

After the grand opening ceremony Thursday at Arena Corinthians in Sao Paulo, Group A game between Brazil and Croatia began.

Celebs took to Twitter to share their excitement about the matches. Here's what they have to say:

Shah Rukh: "And on the most exciting note. I am completely over the moon with FIFA starting. TV glue ready!!!"

Ronnie Screwvala: "It is testament to the sport of football that despite such massive clouds on integrity - we are all excited for the World Cup. No other sport can unite the world at a global level than Football. So much untapped potential for social good."

Amitabh Bachchan: "FIFA pre nuptials on now on Sony Six .. what a fantastic run up.. glued, hued and spewed.. tonight is late night delight!! FIFA opening! Been glued to TV since long and shall see the first game too.. ! Me with Brazil ball !!"

Bipasha Basu: "Watching #WorldsCup with #CocaCola. Where are you?"

Ayushmann Khurrana: "It's game day, it doesn't get bigger than this #WorldsCup."