View Profile
BollyCurry is back with yet another fashion edition! This time we cover the appearances of the tinsel town stars at the recently held L'Oreal Paris Femina Women Awards 2014. Keep reading to find out the glitz and glimpses of the night. 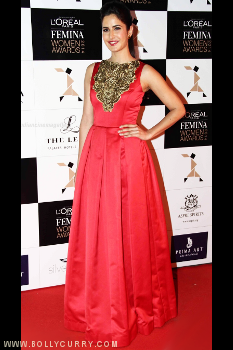 The brand ambassador for L'Oreal Paris, Katrina Kaif attended the night clad in a deep orange-red Atsu gown. The striking gown with pleated skirt and golden and black embroidered neckline was a safe play by Ms. Kaif. Deciding against an elaborate hairdo, she chose a sleek ponytail and accessorized the look with golden ear studs. Now this might not be one of those overly dramatic appearances we've grown used to seeing on the red carpet, but Kat looked good. A job well done! Rating: 4/5
Sonam Kapoor 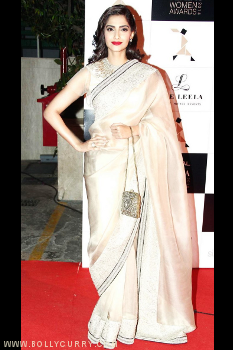 Sonam went with the desi route this time around; not that we're complaining! As always, this fashionista gives the Fashion Police nothing to gripe about. Dressed in a beige Anamika Khanna number, we didn't spot a flaw! We absolutely love the loosely curled hair, light makeup with a dash of red and the studded clutch. The netted saree was accessorized with a diamond ring, golden earrings and hairclip to give the perfect of dazzle. Ms. Kapoor sure knows how to grab eyeballs wherever she goes! Rating: 4.5/5
Dia Mirza 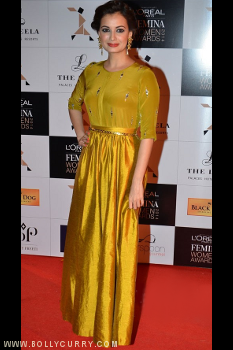 Dia Mirza walked the red carpet in a Neeta Lulla gown? skirt? We can't really say! The mustard colored dress wasn't really flattering to begin with and the look was further ruined by the wrong choice of inner-wear that drew way too much unwanted attention to her torso. The flashy material of the skirt and the crusty make-up was just a plain pain for our poor eyes. Perhaps, more contrast in the accessories instead of the golden dangling earrings and heels might have done some good; but for now the look was a major no-no. A true disappointment from Ms. Mirza who usually knows how to rock the red carpet. Rating: 1/5
Kalki Koechlin 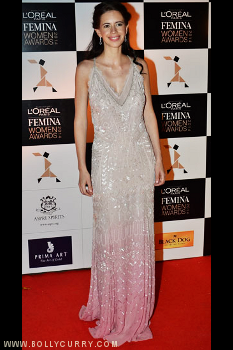 This beauty stepped out in a white and pink Roberto Cavalli gown with a tail. The glittering maxi with a deep neckline that revealed a tab of her cleavage would be appealing on some, but unfortunately for Kalki the look didn't really work. Alas, the wrong choice of hair and loosely fitted gown just made the look fall flat. Even that gorgeous smile couldn't save this one. Rating: 2/5
Neha Dhupia 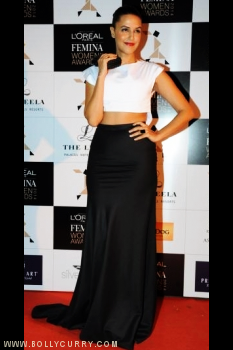 Neha went for the classic black and white. The white DRVV crop top revealed some midriff and was balanced off with the black long tail Ashish N Soni skirt. The black stone ring and clutch was a wise choice with this rather simplistic look. With hair pulled tightly into a bun and dusty makeup with a dash of red, Ms. Dhupia looked okay. The look was passable, but we expect much better next time around! Rating: 3/5
Akshay Kumar 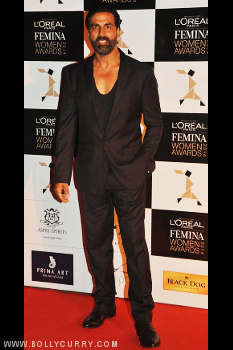 The Khiladi opted for a sober look and went with all black - a black blazer paired with black t-shirt and trousers. The gelled hair and untrimmed beard made him look aged, yet was a decent appearance. While he looked very mature and sober, a little color amidst all that black wouldn't have harmed anyone! Rating: 3/5
Anupam Kher 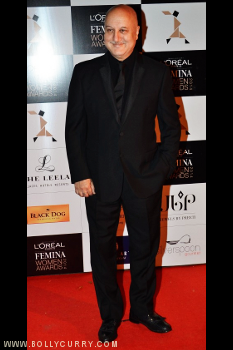 Now this is one powerful appearance by Mr. Kher. Looking dapper in a black four piece suit, this man sure gave the younger men some tough competition. The ever-present smile and joyous demeanor was just icing on the cake! This number surely impressed us, making him look elegant as ever!  Rating: 4/5
Kunal Kapoor 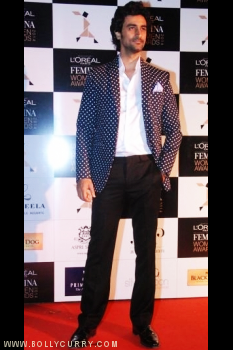 Here's a pleasant change from the plain blacks worn by the men at the Awards night. Sporting a black polka dotted blazer with white pocket square playing peek-a-boo, Kunal finished the look with a gleaming white silk shirt and well-fitted black pants. While we're not in love with the blazer, Kapoor manages to pull the look off well! The casual stance that oozes confidence adds to the overall charm as well. Rating: 3.5/5

With this, we wrap up and take your leave til next time, when we will be back with yet another exciting edition to tell who was a hit and who was a miss. Pour in your comments and tell us your views on these fashion spottings. Hasta la vista, Fashionistas!