View Profile
Now that the Cannes Film Festival has officially kicked off, all eyes are glued to the red carpet. Among them are those of your trusty Fashion Police, here with a report on who's wearing what and how well they wear it...brace yourselves!
Aishwarya Rai Bachchan was the first Indian actress to make an 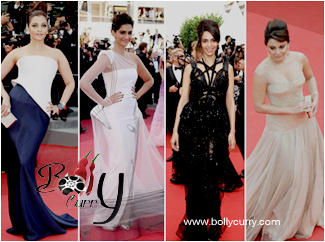 
All four ladies have chosen their favourite designers and made every effort to steal the limelight on the red carpet.
We'll start with Aishwarya Rai Bachchan, who made her appearance at the Sleeping Beauty premier. Ash was seen wearing Armani Prive in starkly contrasted shades of white and navy. We can't deny that she looked very trendy yet elegant in this crisp, structured gown.
Next, we have Minnisha Lamba. Minnisha chose a blush Gauri and Nainika gown, accessorizing with a box clutch, quite similar to the one Aish was carrying. The petite actress made an unforgettable debut at on the red carpet with her soft and delicate look - effortless grace at it's best.
Following Minnisha, we caught a glimpse of Mallika Sherawat. Mallika was spotted at the Pirates of the Caribbean premiere, wearing a black dress by Eric Tibusch. A safe choice for Mallika; it was her usual cut (or shall we say "cuts", since there are more of those than the actual dress) in basic black. Let's hope she shows up in something more surprising at upcoming events...clothes, perhaps?
Last but not least, we saw Sonam Kapoor who was also making her debut at Cannes. Sonam attended The Artist premiere at Cannes in a dramatic white Jean Paul Gaultier couture gown and shoes by Ferragamo. Needless to say, she was positively stunning on the red carpet, true to her reputation as B-town's most fashion forward femme. Sonam is at Cannes as a L'Oreal brand ambassador, which could explain her flawless make-up, the same going for Aishwarya.
So which of these ladies was best dressed for the role of B-town ambassador at Cannes, and which blundered badly enough to get the boot? Share your thoughts on their choices, and keep an eye on BollyCurry for more news directly from Cannes Film Festival 2011!
Editor: Lola & Jenifer.
Graphics: Pooji.