View Profile
Look who's back? But this time it's not a weekly review or an event that I, your beloved Ms. Bolly Chili, make an entrance for. No dearies. I grace you with my presence as my eagle eyes have picked up yet another opportunity to do the usual; deliciously compare and contrast two Tinsel Town dwellers in the same outfit and expertly adjudge who looks better of the two. Read on to gasp at my verdict! 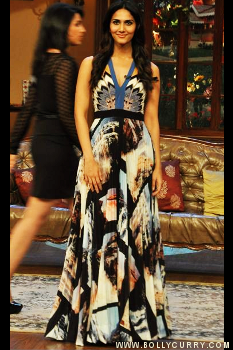 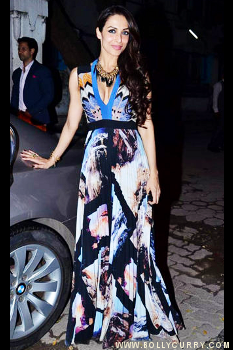 The exquisite Vaani Kapoor, who debuted this year with Shuddh Desi Romance, was spotted in August 2013 in a beautiful Ranna Gill maxi dress whilst promoting the movie in question. In a nutshell, she looks okay. I would have liked to see something done with her hair, the loose ringlets aren't doing it for me. Some diamond studs would have also been nice in adding sparkle to her face as well. Oh, imagine the gorgeous-ness that would have followed! This look is just too average and the overall casualness makes it forgettable. But she looks relaxed so that's definitely a brownie point from moi.
Competing Kapoor in this face-off is our sexy mummy, Malaika Arora Khan, who was seen in a ditto maxi of Ranna Gill's Autumn 2013 collection in mid-November. Alas, what a disaster! The cleavage is something I can deal with, but that necklace? What was she thinking pairing that chunky piece of jewellery with the already-too-busy dress? And don't get me started on that gold cuff bracelet and the ring. What an atrocity, Mrs. Khan! But I'm a sucker for good hair and she definitely wore it good, swept to one side and perfectly fluffed.

The jewellery did it for me so I pronounce Miss Vaani Kapoor the queen of this fashion face-off. Leave me with your valuable comments on who you think wore it worse, I mean better, while I go on another ditto dressing hunt to dig my claws into for the next edition. Ta-ra!
7 Likes