View Profile
The annually held Cannes Film Festival, hosted in Southern France, is a feast for fashionistas, their fanatics and the media all together; the glitz and glamour of the red carpet allures everyone towards this prestigious event. Bollywood stars may not be an uncommon sight at the festival now, but it was all started by one woman who first walked out on the red carpet in 2002 - Aishwarya Rai Bachchan. Since then, she has been a regular face at the film gala. Rai might not have been particularly applauded for her fashion choices, however, it has been the charm and confidence of this former beauty queen that has bewitched and captivated the hearts of millions. 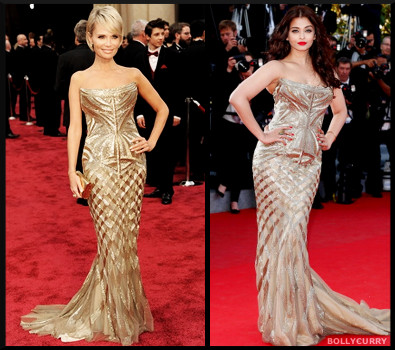 After a series of not-so-impressive appearances at Cannes, this year Rai stunned one and all when she decided to flaunt her corporal form in a golden Roberto Cavalli gown at the premier of Two Days, One Night. Rai opted for simple make-up with a dash of deep red lip color to accompany this intricately beaded figure hugging gown. She decided to flaunt her chestnut glossy locks with simple soft curls, further adding to the perfection and giving definition to her face. From the media to her husband, everyone seems to have gone gaga over this appearance. Rai surely stole the thunder at the red carpet with that absolutely gorgeous look.

But wait, have we seen the gown before?

Apparently, Rai isn't the first one to be donning this Cavalli gown. Kristin Chenoweth, an American television star, was first seen wearing the same gown at the Oscars. Now, this blond beauty might have worn the golden embellished creation first but did she fare better when compared to our light-eyed enchantress? Deciding against dramatic makeup or too many accessories, Chenoweth kept the look simple, too simple in our opinion and a tad bit boring. Also, the gown doesn't look too impressive on her, rather it seems to wash her out.

Chenoweth might have become popular having contested against the former Miss World but did she manage to steal the show? To gracefully declare the winner of this face-off, we state without much effort that this round clearly belongs to Aishwarya Rai Bachchan. But we would like to know your views on the dress and who you think wore it better. Let us know below!

Do you have a suggestion or comment for BollyCurry? Drop us a PM at BC_Dropbox today.
12 Likes