It's often said that third time is the lucky charm. This seems to be the case for this month's Fashion Face Off with three of Bollywood's beautiful ladies donning the same Zara peplum dress. 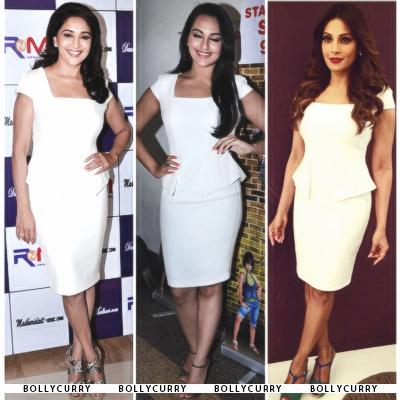 Sonakshi Sinha, the first of the three to have been seen in the dress, suffered the worst fate. Although curvy figures are the secret to carrying off a peplum dress with utmost grace, this one just doesn't work for Sinha. The actress defines awkward with this outfit. Perhaps a touch up on the hair and make up could have solved this problem by a fraction. And in addition, the make up seems amateur for an actress of her calibre. Better luck next time, Sonakshi!

At another event, Madhuri Dixit Nene was spotted posing for the cameras in the very same dress, except one-step closer to perfection than the former actress. The natural make up and curled hair is a plus point to the overall look. However, there seems to be a detail missing. Although for a veteran actress, Dixit's figure is on point in comparison to contemporary actresses, it only emphasizes the lack of a figure that Madhuri once possessed.

Last but not the least is the beautiful Bipasha Basu who appeared to the promotion of her film, Creature 3D sporting the same outfit. In this case, the dress seems to fit Basu like second skin and accentuates the hourglass figure. The loose curls alongside the pearl studs and a siren red mouth, all add to the outfit. Fashion Police declares Bipasha Basu, without a doubt, as the perfect face for this look!

If there was one thing that we disapproved of for all three ladies, it was the shoes. It is assumed that a girl's best friend are diamonds, and her shoes. In our case, it seems the best friend has abandoned these three. On a side note, a resolution for Sonakshi Sinha we hear this year was to appoint herself a hair and make up stylist. Thank God for new year's resolutions!
Writer: Harjot D.
Editor[s]: Fatima W. and Sonia R.
Graphics: Shikha A.