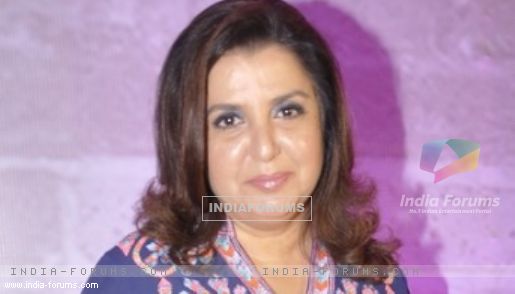 Farah Khan is all set to shake a leg on the stage as part of a promotional tour for her forthcoming directorial venture "Happy New Year" and says that this will be her first live performance in 25 years.

"It's going to be a huge concert. I'm going to be dancing too! I will be performing at the concert and it has been 25 years since I've performed on the stage," Farah told IANS on the phone from Mumbai.

Before wielding the megaphone for the first time for "Main Hoon Na", Farah worked behind the camera as a choreographer and some of her best works include Aamir Khan in the song "Pehla nasha pehla khumaar", Shah Rukh Khan dancing on a train top in "Chaiyya chaiyya", Hrithik Roshan in "Ek pal ka jeena" and Katrina Kaif in hit item number "Sheila ki jawaani".

The team of "Happy New Year" -- Shah Rukh, Deepika Padukone, Boman Irani, Abhishek Bachchan, Sonu Sood and Vivaan Shah -- along with a few other artists, will perform at SLAM! THE TOUR, which is slated to begin Sep 19 at Toyota Center, Houston.

Farah, who teamed up with Boman in her acting debut "Shirin Farhad Ki Toh Nikal Padi", says she will perform on four numbers, and added: "I will do one dance number with Boman."

Looking forward to the tour, where Madhuri, Malaika Arora Khan and singer Kanika Kapoor will also set the stage on fire, Farah said all actors will be performing to some of their chartbusters apart from dancing to "Happy New Year" songs.

The film's shooting was recently wrapped up, but Farah is happy that the camaraderie that the team has developed, will continue on the tour.

They are all looking forward to having a great time and to give the international audience an evening to remember.

"Happy New Year", a musical heist, is the big Bollywood release for Diwali this year.