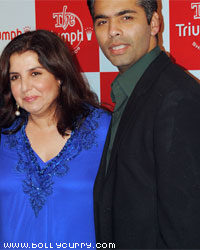 Filmmaker Karan Johar and choreographer-turned-filmmaker Farah Khan will add chutzpah to the Chevrolet Apsara Awards as the hosts of the gala, to be held at Mumbai's Yash Raj Studios Wednesday.

The long time friends will bring their camaraderie on the stage for the seventh edition of the annual awards ceremony, organised by the Film and Television Producers Guild of India.

On her 47th birthday Jan 9, Johar said she is "the most entertaining person" he knows. So it would be no wonder that the duo will use their gift of the gab, and leave the audience in splits.

The two are currently in scripting sessions with the producers of the show - Wizcraft International, said a press statement.

They will be joined by big names from the Hindi film industry to co-host segments of the show with them.