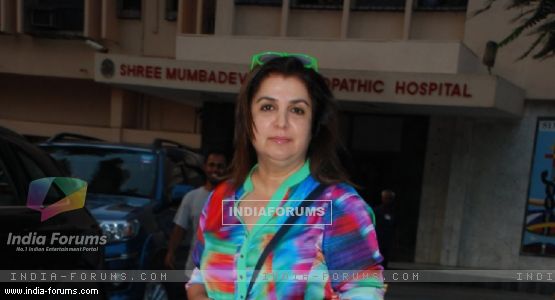 After her successful stint in reality TV show "Bigg Boss Halla Bol", the filmmaker is set to return to the small screen with the cookery show, for which she started shooting on Wednesday.

"N v started shooting 4#Farahkidaawat today... Thank u AB u really can cook! Besides making my kids do this," she tweeted along with a photograph in which her seven-year-old triplets are copying Abhishek's trademark step from her directorial "Happy New Year".

In "Farah Ki Daawat", which will be aired on Colors, Bollywood celebrities will showcase their culinary skills by turning out some delectable dishes, and Farah will be seen breathing down their neck and emphasising on perfection.

Abhishek, who's the first guest of the TV show, also took to micro-blogging site to share his experience.

Farah, 50, known for larger-than-life directorials like "Om Shanti Om", and "Main Hoon Na", also mentioned that her friends have spoilt her for good by offering her a feast time and again.

"The actors that I have worked with also know how much I love food. Deepika Padukone always brings Rasam for me, Boman Irani's wife sends Dhansak for me and Abhishek brings some scrumptious home-made Rajma for me. My friends have spoiled me completely, but I love every bit of it," the foodie said in a statement.

The show will premiere on February 22.