View Profile
How often have we heard, 'One fights with them whom matter the most'.

Apparently, this shall be the adage to fall back on for explanation when we break the latest news coming from the Khans' hell hole. Shahrukh, and Farah. The once upon a time best buddies, who created so much buzz with a speculated difference brewing 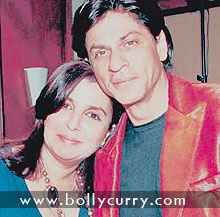 between them, it seems had never really been an estranged pair of friends. Just two buddies being grumpy at each other, to come around in time and hold hands back as 'best mates'!

Rumours had it that Shah Rukh was upset with Farah after she decided to cast Akshay Kumar in Tees Maar Khan instead of himself, the King Khan.

From what is being heard, a recent secret exchange took place between the two, when the choreographer-cum-director was seen entering SRK's vanity van and exiting it a half hour later, alongside SRK, both bearing the widest smiles. Additionally, Farah herself went on record to confirm that there were some misunderstandings but all is well between her and her best buddy!

Well well then! While SRK's efforts to make up things with Salman only just recently backfired, we're glad this surprise has come along in the meanwhile as much solace!

Nothing like watching good ol' pals getting back together, is there?!