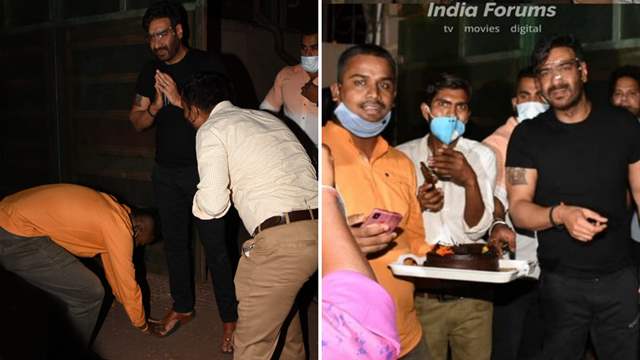 Bollywood’s Singham, Ajay Devgn turned 52 on Friday. While the actor had a worky birthday, his fans made sure to celebrate his special day in full spirit.

Fans gathered outside Devgn’s residence in Mumbai with big banners and a birthday cake to greet their idol. The actor also stepped outside, wearing a protective eye gear to celebrate his birthday with fans.

During the celebrations, few fans bowed down to touch Ajay Devgn’s feet and the actor responded by folding his hands in front of the fans in response.

Check some pictures below:

The fans also brought a chocolate cake for Devgn, who refused to cut the cake. Instead, he asked another person, who was also celebrating his birthday on Friday, to cut the cake.

Previously in an interview with Hindustan Times, the actor had said:

"I’m not a birthday person at all. I’m shy, or you can call me—private. I don’t even cut a cake! Of course, cakes are cut in office, at the shoot and in my home. But I usually get my children or my nephews to do it.”

Meanwhile on the work front, Ajay Devgn will be seen in SS Rajamouli’s magnum opus film RRR. His first look was revealed on his birthday, where he can be seen donning a fierce and enigmatic character.

Helmed by SS Rajamouli, the mega budgeted film aldo stars a mighty star cast including Alia Bhatt alongside Ram Charan and NTR Jr. The much-awaited Pan-India film will have a worldwide release on October 13, 2021, on the festive occasion of Dussehra.