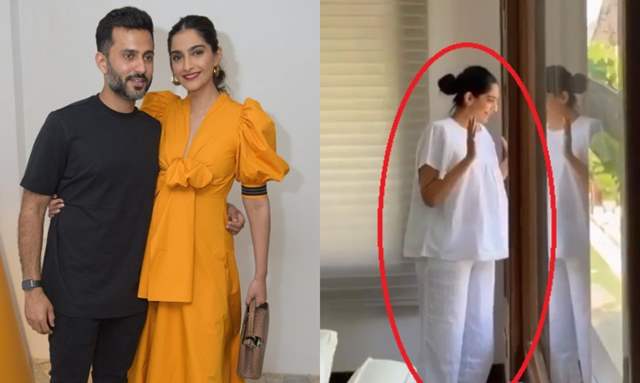 Recently, Sonam Kapoor Ahuja and hubby Anand Ahuja returned to India from London. However, the coronavirus outbreak has compelled them to adopt the self-quarantine method and currently, she is stationed at her residence in Delhi.

Yesterday, a video of Sonam communicating with her mother-in-law Priya Ahuja surfaced on the internet which features her practicing self-isolation. However, it has also shocked the fans as they couldn’t help but notice the baby bump amid the fun banter. While Sonam stood at the window of her house in white Pajamas, her mother-in-law was seen in the opposite house on the ground floor.

Irrespective of the adorable video the baby bump has caught the netizens’ attention and the fans have been going bonkers with happiness.

The good news seems to be a possibility as the Neerja actress has been keeping a low profile off late and she also missed an award show hosted in the country. It seems along with practicing self-quarantine to curtail COVID-19, she is also practicing it to hide her pregnancy news.

On the work front, Sonam Kapoor was last seen in The Zoya Factor which barely tasted success at the box office. Though the sequel of her last hit at the silver screen Veerey Di Wedding has been confirmed by her sister-producer Rhea Kapoor, an official announcement is yet to be made.

With no films lined up, there seems to be a possibility that Sonam and hubby Anand has finally decided to extend their family and welcome a new one.

We suspect that Anand has isolated himself with wife Sonam so that he could look after her during pregnancy!

Stay tuned for more updates and comment your views below.

Sharad Malhotra on people consuming drugs and alcohol: Not ...
53 minutes ago

Payal Ghosh: If I am found hanging from ceiling, remember I ...
57 minutes ago