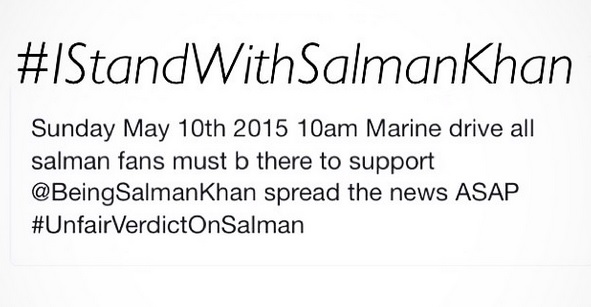 Salman Khan has received abundant support and love from his friends and fans in the past few days of his Court proceedings. Their sincere prayers are surely answered by the Almighty and Salman's conviction of 5 years has been suspended by the Bombay High Court.
Salman Khan is indeed a lucky actor to have his fans take on a rally in his support. On the 10th of May, 2015 i.e a Sunday  a rally has been organised in suport of Salman Khan and against his unfair verdict.
Pulkit Samrat was the first to ignite this fire and he was seen posting a picture containing the details of the rally with a caption that read: #IStandWithSalmanKhan. The twitter is also flooded with posts containing the same hash-tag.
This clearly proves that no matter what Salman followers will always stay true to him through thick and thin.
Priyanka Chauhan