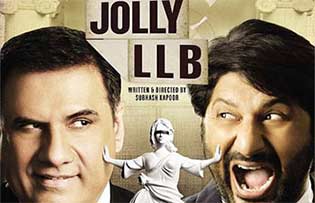 Fans rarely leave actors alone! This happened withactor Arshad Warsi while he was waiting to catch his flight from Chandigarh to Mumbai, and he was surprised to be swarmed with questions about a sequel to "JOLLY L.L.B.".

"Average 6 out of 10 people at the airport have requested me for JOLLY L.L.B. part 2... @subkapoor @SuperAalif @foxsearchlight R U LISTENING," the actor tweeted.

"JOLLY L.L.B.", which also starred Boman Irani and Amrita Rao in pivotal roles, is a satire on the country's legal system. The movie, directed by Subhash Kapoor, was lauded with the National Film Award for Best Feature Film in Hindi.