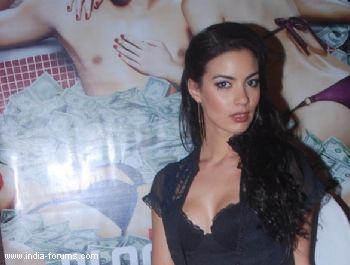 Canadian model Mia Uyeda, who will be seen in the forthcoming movie "Blood Money", says her family is not upset after seeing the leaked intimate video from the film.

"I was surprised because I had no idea about it. My dad called me from Canada after watching the leaked video. Since he works with Indian people in Canada, he gets all the news over there. He called me and said what the leak scene is all about," Mia told IANS.

"He (dad) was not upset at all. I spoke to my grandmother she is 82. She was an actress in Canada. I told her about my role and she said as long as you feel comfortable with it then it is fine. My father is proud of me that I am doing what I always wanted to do. They are not upset," she added.

The actress revealed that director Vishal Mahadkar briefed her about the scenes and that she was mentally prepared for it.

"When I met Vishal (Mahadkar), he briefed me about the scenes and told me 'these are your scenes'. So I knew about the role and it was part of the character. I said I was Ok with it and we are actors it's our job that we should look convincing. You do it half way it will look fake so I decided to jump into it and do it. But I was a little bit nervous," she said.

Scheduled to release on March 30, "Blood Money" features Kunal and Amrita Puri in the lead roles while Mia plays a vamp. And she said she enjoyed being bad on screen.

"I play a character called Roza who is a sexy kind of a girl. I am playing a vamp. She is part of the main plot. I like that name vamp. It's not like my personality at all. Being a vamp is super fun but I would like to try various roles because I have studied acting," the 27-year-old said.

"I would like to explore different roles other than playing vamp but if people want me to play vamp, I am more than happy to do these roles," she added.