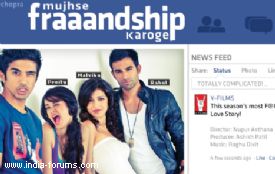 The film, made under Yash Raj Films' (YRF) youth banner, Y-Films, is set for an Oct 14 release. According to the production company, the movie is a 'rom-com set against a Facebook backdrop'.

The highlighted 'status' reads: 'FAKE IT if you can't MAKE IT', in tune with the narrative.

The movie, directed by debutante Nupur Asthana, tells the story of Vishal and Preity who fake their identities online to woo two attractive people - Malvika and Rahul. However, little do they know that the person they totally hate in real life is the same person they fall in love with online.