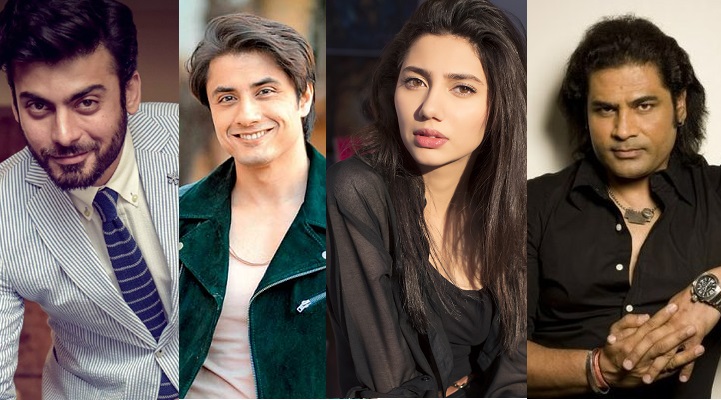 Subhash Chandra, chairman of Zee and Essel group held a press conference in Delhi where he spoke about 'Ban on Pakistani artistes'. The press meet was held to talk about the upcoming Turkish shows on the channel and for the introduction of new faces, however, things didn't go as per the plans.

He emphasized on one thing that is Pakistani actors who come here and show their talents in our country should have criticised terror attacks on Indian soldier. He even requested few of them to do so but they didn't.

Chandra was quoted saying," Around nine Pakistani artistes are working here, out of those six people are what they are because of our channel. Ali Zafar, Fawad Khan, Mahira Khan, Veena Malik, Imran Abbas, Shafqat Amanat Ali, in sabko humne phone kiya, sabko humne request ki, ki aap kuch mat kariye, bas yeh hi kahiye ki jo terrorist attack raat ko sote hue logon par kiya gaya hai, we condemn that, don't even name Pakistan. Even then they don't want to talk about it. Let them entertain their own people. Children of our country are praying price. Can you ask the mother of a person who died while sleeping? Take her answer and then look at it. For how long you will keep art away from this?" (sic)

sloczenko 4 years ago Hi there,

I am sorry to disturbing you all,But I need a indian person for my intercultural communication lesson.Let me explain it for you..I am originally from Turkey and doing my Erasmus Exchange programme here in Valencia/Spain.
I have Intercultural communication lesson which I have to make a presentation about India.I never been in there in India..
So I have an idea about find someone who lives in India.and I will create my poresentation around 25 min about history,economy,flora and fauna all these kind of things.
I just need someone for, if the other students in my class want to ask questions about india..I thought just an indian people can answer these questions..
My presentation will be at 26.10.2016 wednesday at 15:45

So if you or one of your friend who can speak good english,can contact with me online maybe on whatsapp or skype to answer the questions? Probably my class friends will be shock and wont ask any questions..you just need to say hello..that can be also enough for this lesson..

Please do not ignore me..you can also contact with me by

+ 2
4 years ago @Mariaa...I won't argue with you, but will give you some points for your reference...
1) India is 7th largest country in terms of area and Pakistan stands at 35th. So that means India is 5 times that of Pakistan.

So please check your facts before calling someone idiot. Atleast apply your brain . Independence...What independence are you talking about ???Its called Partition. Independence is sought from foreigners who control a land and deprives its citizens of its basic rights.India (The undivided) achieved independence. So please learn the difference between the two.
I won't go into other matters as its of no use . Because you won't agree neither introspect.
Last but not the least, Indians want Peace in real sense, Not back stabbing in the name of peace.

+ 3
4 years ago Please do check my previous comment which couldn't be posted yesterday because of network issue. <br/>Now regarding article... N Maria.. Dear please post articles which does not involve website or claim by Pakistan, because claims by either India and Pakistan is hard to believe at this moment... Specially since UN is said to be involved.. I felt such article is just to maintain cool among the pakis... Had UN made such claims Indian opposition parties too would have helped you guys promote the facts

+ 9
4 years ago To all of you who actually fell for it .or the Indians who are still in denial & saying in the comments section that this news is fake, here is an INDIAN source for you where India's Permanent Representative to the UN Ambassador Syed Akbaruddin dismissed remarks made by Stephane Dujarric.

Once again , no one here's a saint! and @SayaneeH.Lecter : Get your own much needed reality check by actually reading this article .

Indian_123 4 years ago After seeing the comments I would prefer not to argue and debate . Because:

"Talk sense to a fool, he calls you foolish".
"Never argue with an Idiot, they will drag to their own level and beat you with experience"

However I hope peace prevails. By peace I mean in real terms not factual and superficial for the welfare of All.

+ 5
4 years ago I am really confused to see this article n statement of Mr.Chandra,One side he is supporting Pak Artist bann but meanwhile Pak shows are still running on Zindagi. Even,today they'll show Fawad Khan's 'Behad'. Is it not a double standard??

Anyway,I support this ban because,if they (Pak Artists) have no guts to say something against to Uri terrorist attack then,why are they wasting their valuable time n talent here? I still remember when Peshawar attack happened, Every Indian n our BW condemned that terrorist activity because,we know n respect human emotions n humanity.

Definitely,Artist or general public is not terrorist but,their silence is supporting those terrorist. I am cool to see that,Pak Govt also banned all Indian content there,hope they'll stuck wid their decision in future too. Its definitely not our loss. BW n Our tele content haven't need of any recognition. Amitabh to Ranveer - they have their own fanz following,worldwide.

+ 5
4 years ago @Maria .. no India is not running behing your actors .. girl, get a reality check .. we have the 2nd biggest film industry in the world and 1st place doesn't belong to Pakistan .. it is your actors that come here to earn more and That's ok .. art should have no boundaries. But, when your country sends terrorists (NOT army men) to kill our sleeping army men, don't you think it crosses all the lines ??.. By doing the attack, it's not India but Pakistan gives a message that they want war. So, for few months at least, they should not work in Bollywood.
And don't just make it ridiculous saying we should join hand with Pakistan to end terrorism .. honestly, I believe people there too don't want terror attacks but your govornment is a different thing .. they just don't support terrorism but serve them as well. Entire worlds knows it.

+ 3
4 years ago @dreamygal just to clarify term Pak or Paki isn't being used as degraded language.. Its just short form for whole word Pakistani, just like Ausi is for Australia or Afghani for Afghanisthani... Ab atleast in terms of the way I had used it... Not defending just clarifying...
If you had that "guts" to say killing of horrible soldiers is horrible thing to do... Why can't these artists say that...
I agree its matter of Freedom of Speech provided by that nation... Bechare are helpless..
...
Coming to racism... I don't think anyone had ever discriminated him while his stay in India... We had loved him, accepted him like we do to any other actor... But even when Amir Khan cannot be spared for his statements.. Than who is Fawad Khan when it comes to not having back bone to defend the nation who has given him quiet more than what he could have got earlier.. I am not saying...oh without India he would have not been seen anywhere.. Being talented enough he was already well accepted in nation as someone claimed *2 times smaller* than India... But... The fact most Indians know him is because of opportunities he got in India THANKS TO shubhash ji and bollywood..
So what differentiates Indians and people commenting here in support lf decision is that we have reason.. Given to us by these actors themselves... WHOM WE DID APPRECIATE... Unlike racism as you put it... Hating someone from start because of no reason based on their colour or community...
Now...
..
@Maria: Seems you have so much to preach... First no one wanted war... Second it is being forced with continuous back to back attacks... As you said.. Taali ek haath se nai bajti... So the nation should have taken some actions to stop these right after Pankhot... No one did... Topic ignored... Again attack on sleeping soldier... INDIA takes some action... And people are blaming them of being cruel... Like seriously??

and one more thing , you guys KNOW what your media wants you to know , neither you know neither i know the full story!!

The attack that happened in pak 2 days ago killed two army people and not terrorist but wait , why would you believe me? :v

Apply your rule to yourself first and GO SEEK KNOWLEDGE!

As far as i know India wants to fight against terrorism no?! well instead of banning Pak actors you should join hands with them right?!

and to the idiot who said India "contains" more muslims than Pak while this last fought for independance for the same . FYI : Pakistan's area is two times smaller than India's but has 98% of muslims . <br/>To whoever mentionned Pak banning Indian movies :v ! those toh were banned for some political reasons but why did India ban a movie like BIN ROYE in most of the cinemas?! ARE YOU TOLERANT? ! JOKE*
One last thing : war's not a solution , If you would actually "care about " those soldiers you're mourning , then you would know it right?!

So yeah , keep up with your racists comments and PLEASE do pretend to be a peacemaker in this situation :P!

Ps : For t=my dearest intellectual friend who used the word " djihadiste " over here , could you pass on your definition of the word please?! i'd really like to know . Thanks<br/>

4 years ago Mr. Chandra the popularity of Pakistani artistes is not dependent on your channels. You signed because they were already famous.
Yes our artistes are incredibly talented otherwise you would not have signed them.
NOTHING TO SAY MORE!