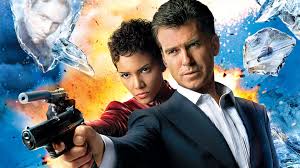 Taking viewers back to the very basics of what a smoldering action flick entails, &pictures brings the 20th Bond film from the series 'Die Another Day' for the first time on Indian Television.  The second film from the line-up under the Bond Nights' festival, Die Another Day is an adventurous captivating thriller.

When James Bond (Pierce Brosnan) infiltrates a North Korean military base where Colonel Tan-Sun Moon is illegally trading weapons for the African conflict diamonds, Zao, Moon's assistant discovers Bond's true identity. As the colonel attempts to kill Bond, a hovercraft chase ensues which ends in Moon's apparent death and Bond's survival. However, Bond gets captured by North Korean soldiers and is imprisoned by the Colonel's father, General Moon. After 14 months of captivity and tremendous torture, Bond is traded in a prisoner exchange where he is sedated and taken to meet M (Judi Dench) who informs him that he is suspended due to her belief that he may have leaked information under pressure.

Upon hearing this, Bond gets convinced that he has been set up by a double agent in the British government. In order to avenge his betrayal, he escapes from the custody of MI6, and travels to Hong Kong where he learns that Zao is in Cuba. Thus starts the journey from vengeance to discovery.

Will Agent 007 find out finally who was the traitor? Will he make it back to the MI6?

3 years ago It is really a outstanding movie and all songs of the movie are very nice and in this movie Hrithik Roshan's acting is amazing.

anurag420 9 years ago Yes,I liked the article the movie is supereb and the review is nice too...

9 years ago omg i gone in to transe state after seeing your acting hrithik. so much feelings that too with eyes only. you are just uncomparable hrithik.

9 years ago you are too good as vijay and how lovely you potrayed that character. you totally rocked in agneepath.

9 years ago hrithik you are outstanding. love your emotions.

9 years ago just watched it yesterday loved the movie

9 years ago Hrithik was amazing and magical one of his best performances yet. Sanjay Dutt and Rishi Kapoor are brillant..and give you the chills espically when kancha laughs crazily..Priyanka does well in her role although i felt it doesnt make differnece in the story...but a special mention for me goes to the young actor who plays the younger Hrithik/Vijay...a talented young wonder...welldone cast and crew of agneepath...