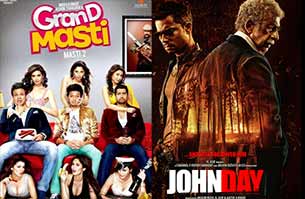 The box office will see multiple releases in varied genres this weekend with audiences getting options to choose from comedy film, "Grand Masti", thriller "Johnday" to horror flick "Horror Story".

A sequel to 2004 released film "Masti", "Grand Masti" is a multi-starrer comedy featuring Vivek Oberoi, Aftab Shivdasani and Riteish Deshmukh in the lead. The film has been directed by Indra Kumar and has been presented by Bharat Shah.

"The film has been made in a budget of Rs.35 crore and more than 2000 screens have been allocated for the film," Shah told IANS.

While "Grand Masti" has a host of established stars, Vikram Bhatt's "Horror Story" will mark the debut of its lead actor, Karan Kundra. The film has been directed by Ayush Raina.

"The film has been made in a budget of Rs.5 crore which includes publicity as well. The number of screens given to the film is about 800-1000," Bhatt said.

Thriller "John Day" has been directed by Ahishor Solomon and stars Naseeruddin Shah, Randeep Hooda in major roles. The film has been produced by Anjum Rizvi who is hoping a good response for the film.

"I can't predict how the film will do. But it is of a different genre than the other two films releasing and the audience for this, is different. let's hope for the best," Rizvi told IANS.

The film has been made in a budget of Rs.17 crore and has a total of 900 screens.