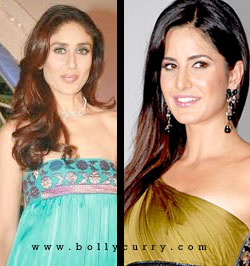 or and Katrina Kaif were seen quite elated in each other's company at the grand finale show of the Lakme Fashion Week.

It was reported that Kareena was miffed with Katrina for hogging all the limelight in her film 'Bodguard' by doing an item number in it. But the two actresses looked quite compatible and friendly at Sunday night's event, where Kareena was the showstopper for designer Manish Malhotra and Katrina was a guest.

The comfort level between the two stars became evident when Katrina stepped on the ramp at the end of the show to shake a leg with Kareena and Manish. Even after the show, the two were spotted holding hands and enjoying each other's company.

When asked Kareena whether she considers Katrina her friend, the 30-year-old replied: 'Of course she is my friend. Why is it this question even being asked?'

Guess there are no permanent friends or enemies in Bollywood!