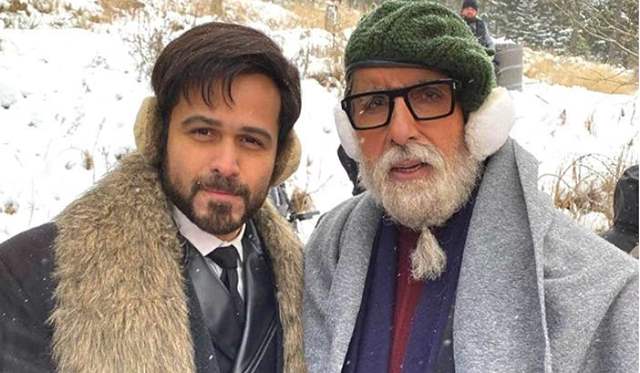 Probably one of the most-delayed but also a much-awaited films lately has been Chehre. The film has megastar Amitabh Bachchan and Emraan Hashmi coming on-screen together the first time as we know. The film recently released to mixed reviews but there has been quite a buzz about it for a while now. In a recent chat with ETimes, Hashmi talked about the experience of working with Amitabh Bachchan and how he felt that the only actor who could have messed the film up was himself as he was the most inexperienced of the actors in the film.

He said, "That was the icing on the cake, and one of the reasons I did the film. This duel with Amit ji on screen, the explosive chemistry between both of us--I realised when I read the script, that it was a big draw to do it. Just seeing Amit ji's process of how he conducts himself on the set and the dynamics he follows as an actor. As a student of acting, I wanted to learn that. That's why I was drawn to do it. Even the young actors are exceptionally good. The performances have to be top notch and there was no getting this wrong with such great actors. So, I think that box was ticked."

On his experience of working with Rhea Chakraborty, he said, "There was a lot of controversy surrounding her after Sushant Singh Rajput's death. But we shot this much before the controversy happened; I think we hit it off from the word go. She's a fine actress and I think she's doing a fantastic job with the character that she's played. And yeah, it was a joy to work with her. I think it's very easy to work with her. She's very professional but still a very chilled out, nice person to work with and very collaborative with scenes--we had some intense scenes together."

We would surely love to see Hashmi and Bachchan collaborate in another project soon.

ALSO READ: Emraan Hashmi is on cloud nine, is winning hearts for his performance in Chehre