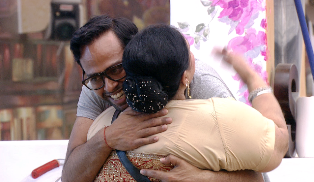 This week Bigg Boss house played host to some guest and these guest were friends and family members of the contestants.

Bigg Boss announced a special task- remote Control task - giving the housemates a chance to earn more points.  Bigg Boss announced that whenever he will give instructions of pause' they will have to stop whatever they are doing and freeze unless he releases them by saying 'play'.

As part of the task, contestant's family members entered the house to meet them.  First to enter was VJ Andy's mother, who entered the house shouting 'Vote for Andy'.  As soon as Andy saw her, he ran to her and hugged her, but before he could say anything Bigg Boss commands everyone to be pause'. Andy's mother starts moving everywhere in the house and meets everyone.

After a couple of minutes, Bigg Boss asked her to say goodbye to everyone, and he also releases everyone after saying play'. Andy gets to meet his mom for couple minutes, before she's asked to bid good bye to everyone 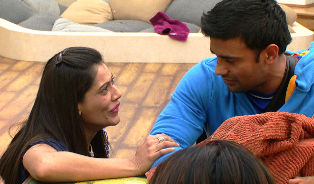 Next to enter the house was Sangram's fellow wrestler friend Yogeshwar. He came and hugged his friend and wished him and everyone luck, and also said that he is doing well in the show.  Next to enter was Kamya's mother. Kamya Punjabi was seen crying profusely after seeing even though she was in pause' mode.

When Sangram's girlfriend Payal Rohatgi entered the house, it was nothing short of a surprise for him as he was taking a steam from a tub with his head covered with a towel. When she came and lifted the towel from his head, even before he could react, Bigg Boss commanded everyone to be paused.

Next to enter the house was ex-contestant of Bigg Boss Dolly Bindra. When she entered the house, the atmosphere of the house changed completely. Sangram even lifter her for a moment. After seeing everyone's relative, Gauhar Khan also wished that her sister Nigaar Z. Khan could come and her wish came immediately true when she entered the house singing a song. But even before she could say anything, Bigg Boss commands everyone to be pause, but Gauhar's tears continues to flow. Nigaar is seen hugging and kissing her sister and showering love on her.

Will this visit from the contestants loved ones motivate them to be in the house till the end or not?

purvi_tvstarlet 7 years ago WAITING TO SEE NIGAR KHAN . WILL NIGAR COULD BE PART OF BIGG BOSS SEASON 7

+ 3
7 years ago Eagerly waiting to see Kamya meet her mother!! Love you Kamya!!

7 years ago Love Gauhar, Kushal and Kamya!! The best contestants on BB7

+ 5
10 years ago I like bohemia alot. .. But i dint knw he was sikh or christian. Anyways indian people living there can't rap, it doesn't suit them LOL