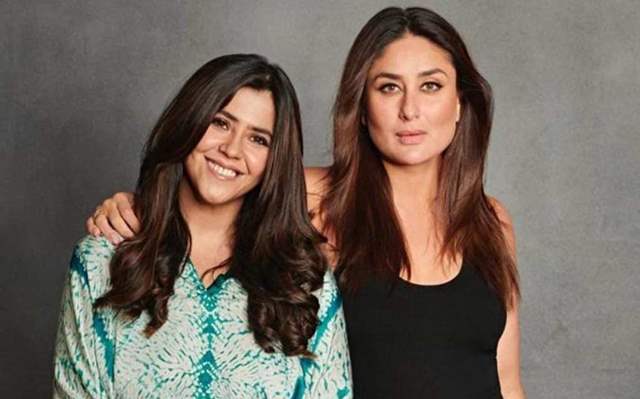 The internet was set ablaze yesterday when the news of Ekta Kapoor teaming up with Kareena Kapoor and Handal Mehta came up. Ekta expressed her happiness about teaming up with such big names in the industry and now she has once again put up a post regarding the same.

Expressing her excitement and delight of teaming up with Bebo and having her on board as a Producer for their next, the content Czarina penned down a wonderful note sharing her feelings for the actress along with a beautiful picture of both of them.

Ekta also shared how she has always admired Kareena and that how strongly she believes in women coming to the fore front as a producer. She also spoke about her journey of becoming a producer in a male dominated industry.

"It’s with immense happiness, pride & excitement that I’d like to welcome @kareenakapoorkhan on board as a producer for our next.

Kareena has been an actor with a huge, admirable (almost envious) body of work… and while her male co-stars turned producers in due course, she’s finally joined the bandwagon now!

I’ve always believed that women have an equal part or play in the business and success of a film.

With women front-lining big ticket films, it’s only right that they get a piece of the pie like their male-counterparts.

28 years ago, when my mum and I started our production house, everyone thought my dad was ‘The Producer’ and that we worked for him… ???????

we tried to tell people that while he’s a huge support system to us, WE are actually the producers here!

The notion of a ‘producer’ back then was strongly associated only with a man.

Decades later, people have finally gotten around to accepting that a ‘producer’ doesn’t necessarily mean ‘male’!

It’s been a hard journey, but an encouraging & happy one!

I’m so glad that today, we can empower each other like this!

Here’s to wishing Kareena Kapoor Khan the best on her journey as a producer…adding another feather to her already illustrious career!"

Ekta Kapoor has a lot of exciting projects coming up and she has been at the heart of some great content for years now. Her last show Broken But Beautiful 3 was a hit and was loved critically as well as by the audiences.

The Content queen has Freddy, Ek Villain Returns and Goodbye as her upcoming projects. All the movie's are set to feature some of the biggest names in B-Town.

Ridhi Dogra & Barun Sobti pair up together for ALTBalaji’s - A COLD ...