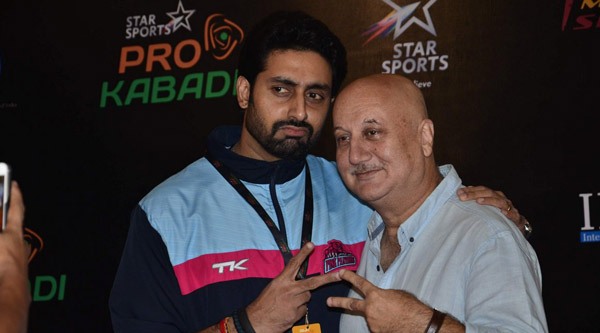 Going by the title of the film the team come together to give Ekkees Toppon Ki Salaami to the first instalment of the league.

Other than the big films, Ekkees Toppon Ki Salaami is the only small film which has been able to merge with the sport.

Anupam Kher who will be seen playing the pivotal role in Ekkees Toppon Ki Salaami shot for the promo for the league which went on air. It is a big coup for a production house to promote their first film at the national level. The entire team was present at the finale to cheer the teams.

The film stars Anupam Kher, Neha Dhupia, Divyendu Sharma, Manu Rishi, Aditi Sharma and Rajesh Sharma. Directed by Ravindra Gautam, the film is a satire infused real entertainment is a story about a common man and his relationship with his sons. Produced by Abhinav Shukla the film is set to release on 10th October 2014.