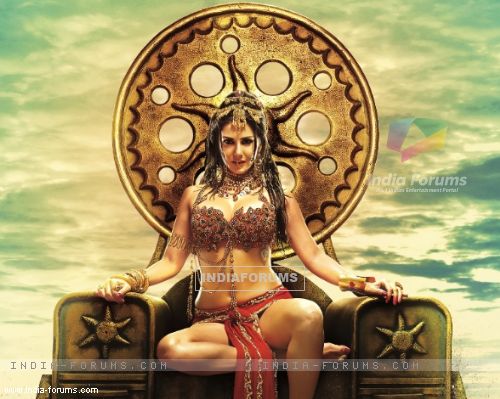 Do you believe in reincarnation? Good! Because Bobby Khan's Ek Paheli Leela will definitely make you feel you should have a new life and not remember anything about the current one especially this movie. The film actually would put you into a Paheli. Like they say never judge a book by its cover, in the similar fashion never judge a movie by its trailer. Now, when I sit to think the movie was pretty much just the trailer. Seems like while cutting the promo, they just chopped off the bad bits and what remained became the trailer.

Ek Paheli Leela is a tale of reincarnation and an incomplete love story which seeks completion 300 years later.

Sunny Leone essays the role of Meera as well as Leela. Meera she is a super model whereas Leela is a girl from a village. As Meera, Sunny doesn't really have much to do other than looking sensuous and pretty which she undoubtedly does in every frame of the movie. There is a tad bit of more acting as Leela. She obviously does where the skimpiest clothes, which I'm not sure was a style statement 300 years back.

Jay Bhanushali plays Karan in the film who is a musician. His effort is visible, just that it's visible a little too much. As a matter of fact Jay doesn't seem comfortable in the skin of his character. Come on Bollywood he is a good actor, please give him some worthwhile roles. Mohit Ahlawat plays Ranveer Singh in the film who is Meera's husband. He is a stone faced man with a good personality. Probably modelling but acting is just not his cup of tea.

Rajneesh Duggal plays Leela's love interest. He does a good job for his part. Other characters like Rahul Dev and Jas Arora do justice to their parts but when it all comes together it all crumbles down. VJ Andy brings in a slight comic element but doesn't help the destiny of the film.

The music by Meet Brothers and Amaal Malik is the only entertaining factor. Main Hoon Deewana Tera and Tere Bin Nahi Laage are beautiful romantic tracks. The movie intolerably slow and thus becomes boring. The past life has been shot aesthetically in the beautiful deserts of Rajasthan and the flavour of the land is showcased beautifully.

The movie has a done to death story line. We have seen the same story in every reincarnation tale in Bollywood. The movie overall is a dull show. Even the die-hard Sunny Leone fans will not have anything much to look forward to in the film. Catch up on some IPL this weekend!

Thinkistan actor Akshaya Shetty on her new show Hello Jee: It is about ...