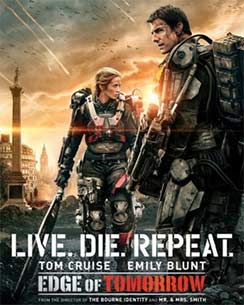 Packed and fatalistic humour, set in a futuristic world that is attacked by extraterrestrial aliens called Mimics, the film with its flimsy, one-dimensional approach to desperation and annihilation, takes liberties with its audience's expectations.

The narration unfurls with a news clip of a global calamity and an oft repeated statement, "All of humanity is at stake."

While the world prepares for the inevitable doom, Major Willam Cage (Tom Cruise) at the United Defense Force Headquarters is desperately trying to shirk off combat duties, citing that he is an advertising guy and not a soldier basically.

So, he is arrested and sent to the barracks in order to be dispatched to the battlefield. From then on he is stuck in a time loop, shuttling between death and re-living his last few days again and again till he saves the world.

How he does it, forms the interesting crux of the narration.

The film's primary gimmick is its time-looping narrative device that initially works in its favour. But the over-repetitive cycle wastes screen time that leads not only to a tiresome viewing experience, but also raises doubts about the credibility and acceptance of the concept.

Based on the Japanese novel, "All You Need is Kill" by Hiroshi Sakurazaka and penned by screenplay writers; Christopher McQuarrie, Jez Butterworth and John-Henry Butterworth, the script defies logic. The plot-holes are competently camouflaged, but not eliminated. Also being an action film, the writers have taken a lot of liberties with the character arc of the protagonist; making the core of the story implausible. 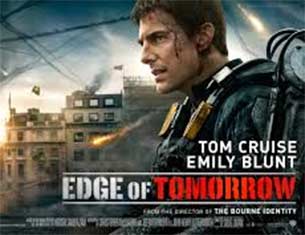 "Edge of Tomorrow" is a Tom Cruise film all the way. He presents his fairly dubious character of the cynical army Major who is thrown into the throes of the battle to be a super-warrior, with style and panache. But the character he portrays, is weak and therein lies the fault. He is competently supported by Emily Blunt who plays a Special Forces warrior Rita Vrataski. She not only mentors him for the finale, but also provides the brisk romance angle in the otherwise heavy-duty action driven film.

Brendon Gleeson as General Brigham, as well as Bill Praxton as Sergeant Farell in stereotypical roles, is wasted.

The sets as well as the effects are standard and so is the production value. The entire military set up along with the combat scenes are typically ordinary.

Visually, the film has the look and feel of a World War II mash-up with a hint of video-gaming technique of engaging and re-engaging to reach a higher level each time.

The computer generated images of the glowing spider-like monsters Mimics have a distinct look. They are attractive and merge well with cinematographer Dion Beebe's visuals which consist of some jerky, hazy and out-of-focus frames.

The 3D effect does make you experience the battle first hand, but the involvement overall is not at all overwhelming.

Working under tight structural constraints, the snappy and intuitive editing by James Herbert and Laura Jennings is worth a mention.

Overall, "Edge of Tomorrow" is a decent popcorn fare for adventure and sci-fic aficionados, but it surely will not keep them at the edge of their seat for too long.