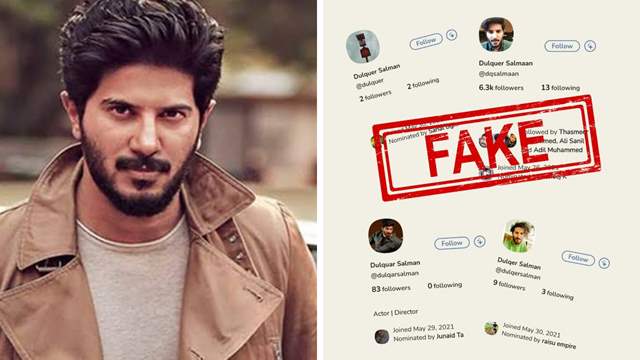 Actor Dulquer Salmaan enjoys a massive fan following down South. He seems to have found a bunch of fake social media accounts that are made in his name. The actor took to his official Twitter handle to clarify that the profiles did not belong to him.

Dulquer shared a collage of several profiles with his name and photos and wrote on Twitter:

“So, I am not on Clubhouse. These accounts are not mine. Please don’t impersonate me on social media. Not Cool!”

Meanwhile on the work front, Dulquer Salmaan  will be next seen as a cop in the upcoming film Salute. Directed by Rosshan Andrews, the film also stars Diana Penty as the leading lady. Besides a cop, the actor will be seen playing the role of an underworld don in the gangster drama Kurup.

Dulquer also has a Tamil film titled Hey Sinamika alongside Kajal Aggarwal and Aditi Rao Hydari in his pipeline.