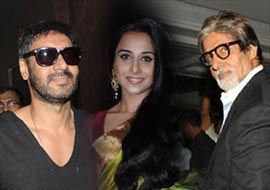 Female foeticide and empowerment of women seem to have become the favourite trending topics for Bollywood stars with Amitabh Bachchan, Vidya Balan and Ajay Devgn amongst the host of celebrities who have taken up the issues on screen and even off it.

There is the exploitative Bollywood of regressive themes, of course, but in a welcome development several stars are using their status and enormous clout to attempt to drive change in India.

Aamir Khan took up the issues with his debut TV show "Satyamev Jayate" and now Amitabh is using the small screen to increase awareness. He is using the promos of "Kaun Banega Crorepati 6" as a platform to support the empowerment of women.

The megastar, who gets a rare chance to come face to face with the "real Indians" through his widely followed game show, says it's dismal to see the state of girls in small towns.

"In most places, they think it is a waste to spend money on girls' education. They even discriminate in giving girls proper food. It is sad," said the 69-year-old. "I believe naari hamaare desh ki 50 percent shakti hai (women form the country's 50 percent power)."

Just some months ago, Aamir blazed a trail when he brought up hard-hitting facts on female foeticide on the first episode of "Satyamev Jayate". And he just didn't talk, he went beyond the realm of television, met ministers and steered some action against those who practise the heinous crime of killing a girl child in the womb.

According to the 2011 Census, the rate at which the unborn female child is killed amounts to killing off a million girls a year. As a result, the ratio between girls and boys has been affected -- the 2011 census revealed that there were only 914 girls for every 1,000 boys.

"Female foeticide is a very serious issue. And if it continues the way it is, it will get worse," he said.

The buzz around her prompted actress Bipasha Basu, one among three sisters, to do something for the cause in Rajasthan.

"The rates in Rajasthan are alarmingly high. We have come leaps and beyond in terms of everything in life, but when we get to hear that people can kill their own child just on the basis of sex, the thinking seems just so small," Bipasha told IANS.

Independent and successful, Bipasha feels lucky because her parents think that the best thing that has happened to them is "three beautiful, individual, different kinds of girls they have".

"And the kind of freedom my parents give to me, I really feel that people should realise the value of a child, irrespective of the sex," she added.

Vidya has also been using her star status to drive change. She recently unveiled a giant abacus in Lusa village in Uttar Pradesh, urging women to study.

Ajay Devgn, who has a daughter and a son, has teamed with actress wife Kajol for a short film on female foeticide.

Filmmakers are equally geared up.

"Jalpari: The Desert Mermaid" and "Riwayat" are two recent films that have attempted to delve into the aftermath of practices such as female foeticide.

"Riwayat", a production by two NRI doctors from Australia, boasts of no big names. At the heart of the film is the emotional journey of three women from different walks of life and their trysts with foeticide.

Tannishtha said: "When I read the script, I thought being a woman and an actress it is very important for me to support a film like this."

The mantle for social responsibility lay on just a few activist actors like Shabana Azmi, who recently held the third edition of her NGO Mijwan Welfare Society annual fashion show, supported by over 25 celebrities.

There are others to share it now, also believing in entertainment with responsibility.