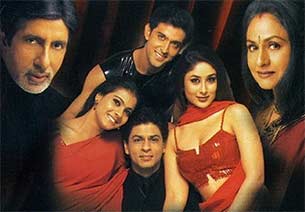 It's been 12 years since Karan Johar's "Kabhi Khushi Kabhie Gham" hit the big screen. The filmmaker says it was his father Yash Johar's favourite movie, while the film's lead actor Shah Rukh Khan thanked the whole team for making it a success.

"12 years of K3G, my dad's favourite movie...he always cried when he saw it, and said 'Shah Rukh and Amitabh Bachchan reminded him of his dad and him'," Karan shared on microblogging site Twitter Saturday.

Shah Rukh, who played Rahul in the movie, had a lot of people to thank.

The film released Dec 14, 2001. It spoke about family values and the tragic feeling of loss when loved ones part ways. Based on relationships, the movie was loved both in India and overseas as well.