Who can forget the roller-coaster laughter scenes we had in Seeta Aur Geeta. The elegant and Dynamic Dilip Kumar enacting Ram as well as Shyam. The bubbly and energetic Sridevi stealing hearts away with her double masti in Chaalbaaz. There is a lot more, but when it comes to the Shehenshah of Double Roles, our mind clock stops with the scenes of the Stylish Don and his Mumbaiyya look-alike, played by Amitabh Bachchan. 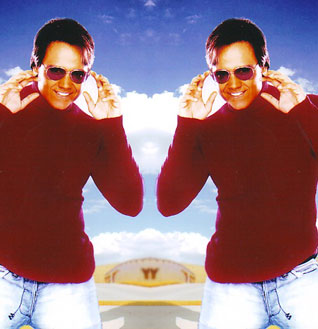 Featured Video
Do you think the Double Role Fever ends there? This high action drama continues in our daily soaps as well. Take our own Kumkum aka Juhi Parmar who played the role of the Dhabewali Chanda in Kumkum Ek Pyara Sa Bandhan. The lovable Sachin Shroff essayed two almost opposite characters - the evil Karan as well as the dutiful son Dhruv in Sinndoor Tere Naam Ka. Sai Deodhar too played multiple roles in Ek Ladki Anjani Si and so did Abhay Vakil in Paalkhi and the list is truly endless….

Now what makes a “Double role” click? Do the stars find it easy to enact a Double Role? Well, let us get answers to these questions from our very own “Double Role Specialist” of Tellydom, Yash Tonk. Yash has already previously played a double role in Kahiin Kisi Roz. He is now busy playing a double role in Balaji Telefilms' Karam Apnaa Apnaa. According to Yash, “There are more positives than negatives to get from double roles. It is stressful, but the challenge involved in enacting the roles of two identical, yet different characters , gives me the much needed excitement. The actor should be satisfied if one role of his complements the other role he is playing.”

One check, two roles - an exciting yet not very lucrative deal for the actors but definetely a double treat for us, isn't it I-Fians?

N KEEP UP THE GR8 JOB

+ 3
15 years ago The article is fantastic. Had fun reading it..! thanks for sharing! and i loved how you have created telly buzz! I hope u guys will be successfull!
good luck!

+ 3
15 years ago The article is great, sree di! Its funny, interesting and a lot of fun to read

15 years ago i'm sorry to say, but double roles are not treats for me no more! i'm fed up with the concept!

+ 3
15 years ago thx for the article..its different to see yash in the double role he has in karam apna apna