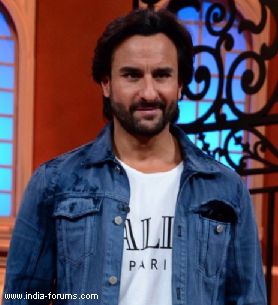 Actor-producer Saif Ali Khan, who is the father of two children - Sara and Ibrahim - says he gives them their space and is not sure whether his daughter wants to get into films.

Both are Saif and ex-wife, actress Amrita Singh's, children.

On reports that Sara is planning to get into film he said: "I give them a lot of space and don't control them. I think may be Sarah is a little interested but she is studying in her first year in America. After she gets her degree from Columbia she can do whatever she wants.

"I think she wants to work in some government agency so I don't know if she is going to get into movies."

He further added: "She gets compliments and she is excited with the idea but her work has nothing to do with films."

Meanwhile, Saif says his daughter is a huge fan of Parineeti Chopra.

"My daughter is a big fan of Perineeti and she says she is the best actress we have," said Saif.

The actor will be seen with Parineeti Chopra in Dinesh Vijayan's directorial debut.