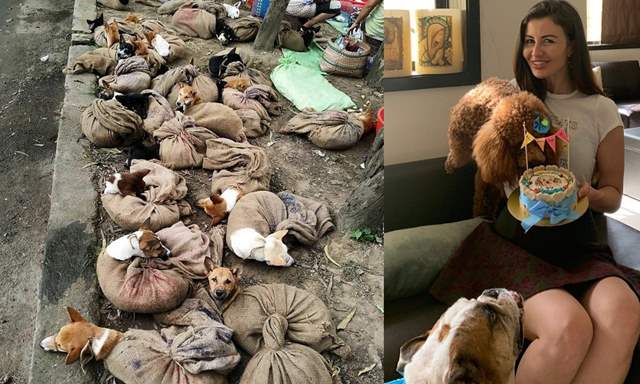 In recent times, there has been a spate of horrific incidents of animals being abused and killed in the country, that has stirred public outrage and shamed humanity. Now, in another instance, a post surfaced on Twitter about dogs allegedly being transported across the state borders of West Bengal and Assam to Nagaland illegally for human consumption. Bollywood celebrities couldn’t watch the terrifying picture and shared their views, recently Giorgia Andriani also shared her views on the same.

'The idea of these dogs tied on a rope and kept in a bag as if they were goods to be sold and murdered to be eaten makes me feel sick. If you’ve seen the picture you must have observed how these dogs are looking at each other scared of what is about to happen to them as they are extremely intelligent animals and have a very developed intuition.' Giorgia said.

She further added, 'I have a dog pet and whoever owns any kind of pet can understand how animals have their own personality and murdering them in order to have their meat is just outraging. Of course I’m not only referred to pet animals like dogs and cats but every animal on earth. Many I hear saying I don’t want to know how this piece of meat ended up on my table. And this article is especially for you who live in voluntary ignorance because everybody should be aware of the pain that animals go through during their life as they’re kept in very bad conditions, sometimes in cages with thousands of others and never made to see the light, sometimes on ropes where they can’t move and finally killed in such brutal ways just to end up there on that plate.

Many also say why do you care about animals while people too are suffering, but why can’t one care about both? It’s not the case where one has to choose whether to either be more empathetic for humans or for animals. However one great thing about our times is social media, which is accessible to everybody and everybody gets a chance to raising their voice to change things for better and for ever. animals have no voice so somebody needs to stand up in their sake.'

The Italian Beauty will soon debut in Bollywood with 'welcome to Bajrangpur', Apart from that, she is set to raise the temperature with an item number in much-awaited 'Sridevi Bungalow' starring Arbaaz Khan and Priya Prakash.

‘Sushant Singh Rajput Has Been Murdered, There is Conspiracy Behind ...

A HUGE FAN 1 months ago This is horrible. Please take a stand for them, everyone.

tabby999 1 months ago Why only for dogs and not for other animals ...why this biased attitude ..it's totally wrong...fight to save lives of all from brutal humans ..

Mohit Kumar: Surviving in Mumbai without work is tough; it's ...
6 minutes ago