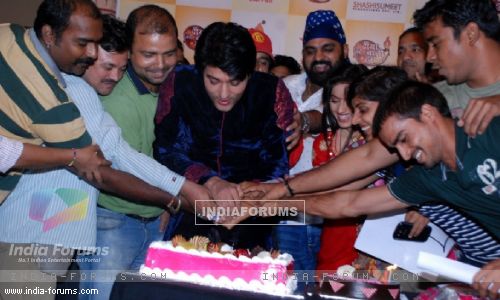 Shashi Sumeet Mittal's popular show Diya Aur Baati Hum on Star Plus completes a successful journey of 3 years. While the show has been loved and praised by the audience for the award winning performance of the actors, Diya Aur Baati has yet maintained its top position on the TRP chart. To commemorate the success of the show and the hard work of the cast and crew, a cake cutting took place on the show along with the leads of the show Suraj and Sandhya (Deepika Singh).

When asked the doting and obedient husband Suraj, Anas Rashid he says, "Its been a great experience to be a part of such a big show and completing 3 years now a days on TV is not a small thing. Its a big honor and its about luck which no one predict that whether this show will work or not but with the grace of God and all your support and everyone's hard work on set, we have completed 3 years."

Responding to the wishes of the fans, Anas says, "I have nothing to say except thanking you so much because India Forums is a kind of a site which mostly is visited by the youngsters. I have got to know that they visit India Forums for Diya Baati which is very rooted. It shows that all the youngsters are eager to know about the backward period what is going to come."
We have heard that Suraj and Sandhya are soon going to celebrate their 2nd wedding anniversary. So when asked about the same to Anas, he replies, "Suraj Sandhya are going to celebrate their wedding anniversary. That's another twist in the story. Let's see how are they going to celebrate their anniversary, abhi toh family pe dukhal ke badaal chaaye huye hain...lekin jab Bhabo, Babasa aur puri family ka saath hait toh ghabraane ki koi baat nahi."

We wish the entire team of Diya Aur Baati Hum a hearty congratulations and best wishes for the upcoming episodes!

Ranjeeta_ 6 years ago Anas Rashid and Deepika rocks together as SoorajSandhya :)

b2011 6 years ago Diya Aur Baati Hum is the best.
Anas and Deepika rocking as SurYa.

Ranjeeta_ 6 years ago Anas Rashid, the celebration of 3rd year of Diya Aur Baati Hum is still going on, how nice :) Today's off screen segment about SoorajSandhya's surprise was too good and once again the cake cutting was superb.