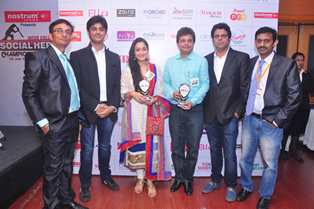 Social Hero is an inter college cricket tournament supporting the cause of eye donation in association with Rotary Club, Nostrum Jeans,  Tarun Mitra Mandal and 10 eye banks in Mumbai.

This event saw attendance by Disha Wakani and Asit Modi from Taarak Mehta Ka Ooltah Chashmah, Disha Wakani enacted the her popular character of Daya from the show and was very much honored to support the cause who said, "If I had ten heads I would have donated 20 eyes to 20 families which would bring light to darkened lives of blind people"

An overwhelmed Asit modi said,"Being here and listening to the views of dignitaries of different fields on eye donation was great. The Broad and Wide team has raised their bar this time by involving the youth in the social cause of eye donation."

The aim of this cricket tournament is to appeal to the youth through cricket and spread awareness about eye donation.

Dayajethafan 6 years ago Hatts off for such a noble cause ..it takes a gentle heart to work on such a cause .. Great work ...n cheers to them

-Lakk- 6 years ago Great news TMKOC is always the Best.
Asit sir and Disha Man are doing such a great work.
Best Of Luck To Them.

Hope this tournament should be sucessfull and Many donations should be collected now.

BEST OF LUCK to TMKOC also for its future Presentations.

fj08 9 years ago wow... sounds weird, i would have liked to see them together, love both Imran Khan

Jenifer. 9 years ago That's actually quite funny. I remember being shocked at finding someone with exactly the same name as me, albeit being 17 years younger!