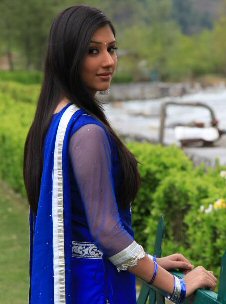 As we know that the life of the television actors is really hectic because of which they end up spending less time for themselves. Also they also do not get time to spend with their family or friends as the hectic shooting hours does not allow them to do so. But well, it is a bitter fact that the television actors have to deal with.
The pretty actress Disha Parmar who is seen playing the role of Pankhudi in Sooraj Barjatiya's Rajshri Productions popular daily soap Pyaar Ka Dard Hai...Meetha Meetha Pyaara Pyaara... on Star Plus, is off for a much needed holiday.

The month of December is one of the most pleasant time when one can go for a vacation. Our reliable source informs us saying, "Disha Parmar has taken a few days off from work and is heading for a holiday to Dubai."

To know more about her holiday plan and the reason behind choosing Dubai for a trip, we tried contacting Disha but she remained unavailable for any comments.

Well, we hope that Disha enjoys her much needed break thoroughly!

Haisisterz 6 years ago nice one disha! and have a relaxing and great time there in dubai! i hope this holiday will relieve all your stress!

Tacker_Holic 6 years ago Love you Disha Parmar! Hope you have a lovely relaxing time in Dubai and have a lot of fun! Come back soon refreshed and ready to woo us all again with your exceptional acting skills! Will miss you!

meghu2000 6 years ago Love u Disha!! Glad that you got your much deserved break!!

tulipbaby53 9 years ago I like them both, but I'm not sure how they will look on screen!