New Delhi, Sep 1 (IANS) Among the many Indian fans of Lionel Messi is model-turned-actor Dino Morea, who is all set to pack his bags to go to Kolkata to watch the football star play!

'Tomorrow is a super Messi day for me, will be in Calcutta. Can't wait to watch him play live,' Dino posted on Twitter Thursday. 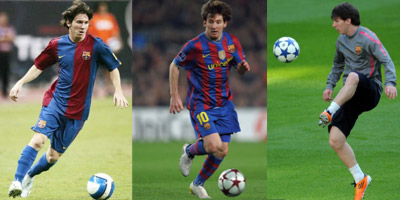 Kolkata is already buzzing with soccer fans going gaga over Messi's visit to the city. Messi arrived in Kolkata to play for Friday's FIFA international friendly tie between Argentina and Venezuela.

There is one cosmetic item in Karisma Kapoor's bag that she never walks out without.

'I love my lip balm. I love it and can never leave home without it,' said Karisma.

The actress, who is working on a movie 'Dangerous Ishq', after a sabbatical of five years, says she never used to pay attention to her skin earlier. But the glowing girl admits she is conscious now.

'Honestly, I used to be so busy with working that I didn't had time to even apply cream. Now I realise that it should have been a concern for me at that time, but I ignored it at that point,' she added.

When 21-year-old Priyanka Bhole was chosen to live the life of actress Sonakshi Sinha through UTV Stars' 'Live My Life', she must have expected everything lavish! While a lot of things were larger than life, the young girl was quite taken aback by the breakfast!

Pune-based Priyanka received a warm welcome at the lobby of a five-star hotel, and she was booked into a duplex suite full of goodies - an iPad with an orange cover, Being Human t-shirts, matching flip-flops and a letter from her favourite star, Sonakshi.

However, the next morning, when Priyanka was expecting more - all she got for breakfast was one banana, said a source.

But Priyanka took it sportingly! No wonder Sonakshi lost oodles of kilos to look the way she does now, post her film debut in 'Dabangg'.

The episode featuring Sonakshi and her fan will be on air Sunday.