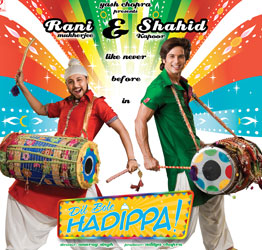 Featured Video
will be presented in the prestigious Gala Presentations section of the festival as a World Premiere. The film, being produced by Aditya Chopra with Debutant director Anurag Singh, stars Shahid Kapoor and Rani Mukherjee in lead roles and releases worldwide on September 18, 2009.

In a village where girls don't play cricket, Veera (Rani Mukherjee) has to put on a turban and beard and become a man to fulfill her dreams. Her brilliance on the field earns her a place in Rohan's (Shahid Kapoor) team and Veera Kaur becomes Veer Pratap Singh.

And then begins a roller-coaster journey of Veera, Rohan and Veer filled with music, romance and comedy through Punjab and beyond.

The movie's cast and crew will grace the red carpet and attend the first public screening anywhere in the world of the film, on September 13, 2009 in Toronto, Canada.

TIFF is among the top film festivals in the world and it is indeed an honour to be selected for such a screening. A publicly-attended film festival, nearly 400 films are screened at approximately 23 screens in venues across Toronto. The annual attendance at TIFF exceeds 300,000 from public and industry audiences.