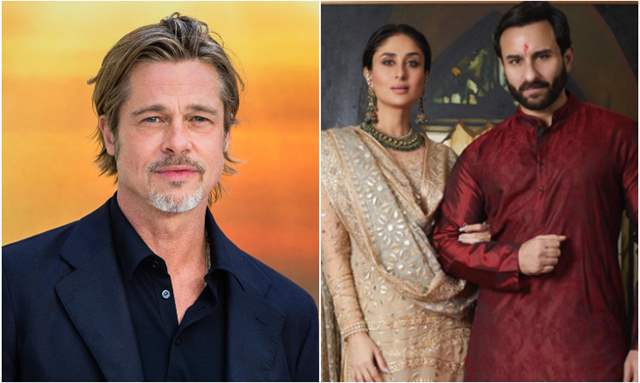 Power couple Kareena Kapoor Khan and Saif Ali Khan are adored across the nation owing to their cute and classy pictures. In retrospect, the duo has collaborated on several occasions and it was on the sets of Tashan that they finally started dating and eventually fell in love.

Saif-Kareena were showered with blessings when they finally tied the knot in 2012. But, did you know, they even received a congratulatory message from international star Brad Pitt?

The adorable couple shares excellent chemistry and during the initial days of their relationship, they were often compared to Brad Pitt and Angelina Jolie. Interestingly, when Brad was promoting his movie Killing Them Softly, he was asked about the comparison. The Hollywood actor simply chose to send them love and luck.

In an interaction with Times of India, Brad said, "Well, they are a good looking couple! No two individuals in a relationship can be the same as another so I don’t know if it is correct to compare them to us. But I am glad they will soon be getting married and I wish them all the luck and a beautiful life ahead."

In February, the couple was blessed with a baby boy whose name is yet to be revealed. However, owing to the ‘name’ controversy that erupted after the birth of their first son Taimur Ali Khan, Kareena and Saif have decided to keep their second son out of the media glare.

A recent media report quoted a friend close to Saif-Kareena and revealed that decided they have decided to ‘keep son no. 2 completely out of the public eye’. The friend also revealed that their second son would not be exposed to the public glare the way Taimur was.