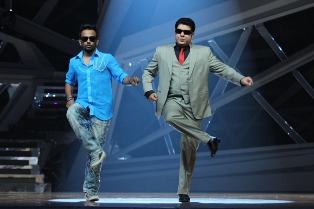 With the finale week of Star Plus' Nach Baliye season 6 being just two weeks away, it's not only the contestants who are gearing up for breathtaking performances. Well, the judges Shilpa Shetty, Sajid Khan and Terence Lewis too seem to leave no stone unturned to make it big.

From fancy dress to 'latkas and jhatkas' to showing their cooking skills the judges have done it all. Sajid Khan has gone a step beyond and surprised everyone with his never before act.

So who made Sajid perform? Star performer Dharmesh shot a sequence for the show's upcoming episode which was themed Teen ka Tadka'. Buzz is that the famed dancer actually got Sajid Khan to shake a leg on not just any random style but Robotics.

Sajid has kept up to his words and performed the act with Dharmesh and has stunned every contestant, judges and crew members with his daredevil' act.

So delighted was he that he went to say, "I did mention earlier that I will be performing during the finale week. I have kept up to my promise and have managed to not just dance but do Robotics. I still don't believe myself for doing this. I guess this is the fun element of the show, one can expect the unexpected. I only hope people don't take my dancing skills seriously, I'm still a director."(Laughs)

Guess Sajid is really trying the unconventional way to tickle the audience's funny bone! Yes, we are sure he managed to pull it off well!

Shabana Azmi speaks about recovering from her Devastating ...
23 minutes ago

Who is AK in Sushant's Unseen Video that has Surfaced? Watch ...
27 minutes ago