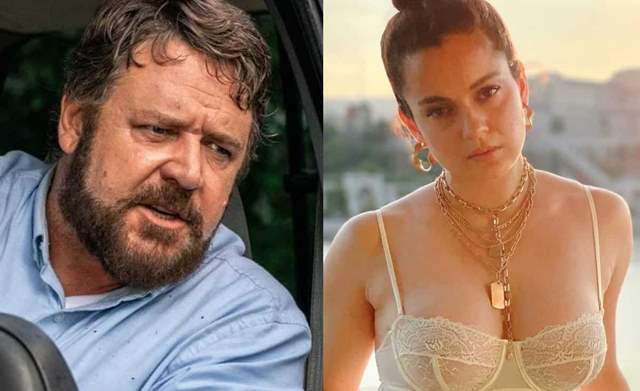 Hollywood star Russell Crowe and Kangna Ranaut have been making headlines. The two stars have come in the news after a fan expressed her desire to see the two versatile actors in a movie together.

The tweet started trending after Crowe retweeted the fan's tweet further giving rise to a possibility of the duo coming together for a movie.

Netizens started speculating that in a way Crowe too expressed his desire to work work with Bollywood actress Kangana Ranaut by reposting the fan's message.

The tweet by the fan read, “How great it would be if two great actors from two different film industries, Academy award winner @russellcrowe and 4 times National Awards winner #KanganaRanaut make a movie together?" 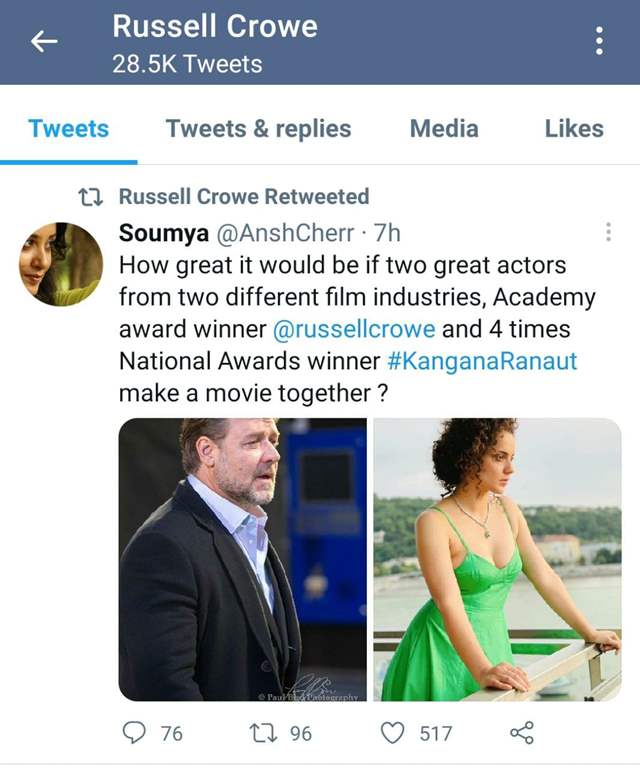 The 57-year-old actor, who won the Academy Award for his performance in Ridley Scott’s Gladiator in 2000, retweeted the post, sparking a frenzy among fans of both actors.

Not only him, some others on Twitter too agreed that they would make an incredible pair on-screen.

While one wrote, ‘No doubt that they would make an incredible duo. Can’t wait for this movie’.

A few other fans also supported the idea. “No doubt that they would make an incredible duo.

What do you think? Should Kangana and Russell come together for a movie? Share your views in the comments section below.

Meanwhile, on the work front, Russell will be seen next with Chris Hemsworth, Natalie Portman and Christian Bale in Taika Waititi's ‘Thor: Love and Thunder as Zeus’.

The Hollywood actor has films such as ‘A Beautiful Mind’, ‘Noah’, ‘The Nice Guys’, ‘Man of Steel’ and others to his credit. Russell won the Academy Award for his performance in Ridley Scott's ‘Gladiator’ in 2000.

Kangana will be seen next in ‘Thalaivi’, a biopic on J.Jayalalithaa. She also has ‘Tejas’ and ‘Manikarnika Returns: The Legend Of Didda' in her kitty. She will also play the role of former Prime Minister Indira Gandhi in an upcoming political drama ‘Emergency’.

+ 6
2 months ago No doubt Kangana is a motor mouth....but she is a FANTASTIC SELF MADE actress.. love her for her craft.. she is gonna be awesome

2 months ago This actor must be onto something if she gets lovers of the well-entrenched agenda driven culture of the Hindi entertainment industry as it exists currently, growing horns and howling vociferously against her on social media. I personally don’t like artists being open about their beliefs, but hey, media the world over has been hijacked by the left and all dissenting opinion suppressed repeatedly, so I can’t but admire someone who speaks her mind regardless.

2 months ago I hope he doesn’t degrade himself by working with some psychotic Indian actress. God help him!

2 months ago God help him 🙏 Kangana is a good actress no doubt but the way she reacts to people is weird.

2 months ago God help the HW star and don't spoil them by wanting a film with the two of them.