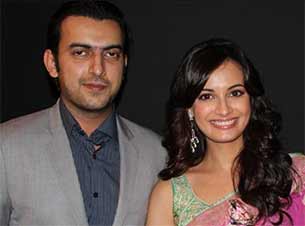 Actress Dia Mirza, who is now officially engaged to producer Sahil Sangha, says she had no clue that her beau would pop the question in New York. She says he made it the "most memorable moment" for her.

Dia and Sahil got engaged in New York earlier this week.

An excited Dia said: "I had no clue this was coming. Sahil took me completely by surprise. It was the most memorable moment of my life. Getting engaged to the man I love has to be the most magical experience of my life so far. I am still swimming in the clouds."

Explaining the selection of venue for the magical moment, Dia said: "New York has been the host to many turning points in Sahil's life. He chose his favourite city for our golden moment. And I am happy that he did."

Sahil said: "New York feels like home at many levels. So it didn't feel that far away from home at all."

Asked about their wedding plans, Dia said: "The date of our wedding would be fixed as soon as we return to India."

As of now the duo is awaiting the release of their ambitious production "Bobby Jasoos", which releases July 4.