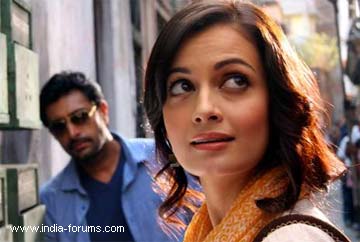 While most Bollywood actresses have asked for voice artists to dub for their Bengali films, Dia Mirza chooses to be different. She has taken up the task of dubbing her own lines for debut Bengali film "Paanch Adhyay".

Dia, whose mother is a Bengali, plays a half-Bengali girl named Ishita in the film.

"I would say my Bangla was decent before I filmed 'Paanch Adhyay' and post filming, spending time in Kolkata, conversing with so many people during my time there, it has only gotten better. I still would like to learn to think in Bangla," the 30-year-old said.

Talking about her character Dia said: "My character travels through the ups and downs of marriage and the poignancy of love... lost and found. I am at a head space now where I am looking to expand my horizons. Bangla is my mother tongue and it makes all the more special that my first regional film is Bengali."

The film, directed by Pratim D. Gupta, also features Priyanshu Chatterjee and Soumitra Chatterjee. It is expected to release around Durga Puja in October.