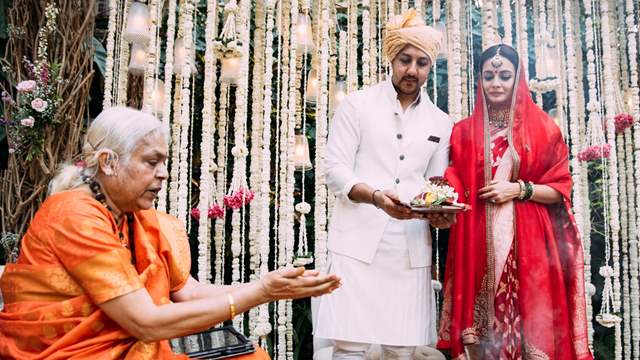 Bollywood actress Dia Mirza tied the knot to businessman Vaibhav Rekhi in a dreamy wedding on Monday. The wedding ceremony was held at Dia’s Bell Air Apartments in Bandra West.

Dia had taken to social media to share pictures from the wedding function and had even penned a heartfelt note which read: “Love is a full-circle that we call home. And what a miracle it is to hear its knock, open the door and be found by it. May all puzzles find their missing pieces, may all hearts heal and may the miracle of love continue to unfold all around us.”

Soon, the pictures were all over the Internet and congratulatory wishes started pouring in from all quarters. Fans were also quick to notice that a woman priest presided over the ceremony.

Few minutes back, Dia shared a picture featuring the priestess doing the wedding rituals. She wrote: “Thank you Sheela Atta for conducting our wedding ceremony. So proud that together we can #RiseUp #GenerationEquality”

Dia and Vaibhav opted for a lowkey ceremony and got hitched in presence of family and friends. As per reports, only 50 guests were invited including B town celebs like Aditi Rao Hydari, Jacky Bhagnani to name a few.

Post the ceremony, the couple had greeted the paparazzi outside the venue and also distributed sweets to the shutterbugs. Dia looked simply beautiful in a stunning red banarsi saree, while Vaibhav complimented her in a white sherwani.

This is the second marriage for both Dia and Vaibhav.

As per reports, Rekhi's first wife was yoga and lifestyle coach Sunaina Rekhi and the ex-couple also have a daughter together.

Dia Mirza was previously married to Sahil Sangha hut announced her separation in 2019. After 11 years of marriage, the couple had filed for divorce and parted ways.