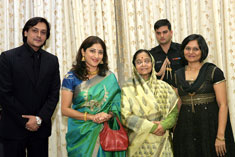 Featured Video
ecstatic because the President Mrs. Pratibha Patil ji was very impressed with this entertaining and well narrated film 'Dhuaaan… from the fire within' that also deals with a rampant and current issue. She saw the film at Rashtrapati Bhawan in Delhi with 300 plus dignitaries. Once the screening was over, everyone complimented about the performances and the way story is told.


Idea of Dhuaaan had taken germ from a real life incident where courage of one had become back bone of an entire society. That idea slowly developed into an entire film and it's turned into a journey that began alone but has brought so many people along with her. It's a film that would actually ignited The Fire Within people's conscious to dispel Dhuaaan.


'DHUAAAN……… From the fire within' is produced under the banner of Wild Water Entertainment. Direction & Concept-by Dr. Mrunalinni A. Dayal, its director of photography is Jahangeer Chowdhary, Story is by Late Sujit Sen, Screenplay & Dialogue are by Sanjay Chohan, Lyrics is by Irshaad Kamil and Music is by Sandesh Shandilya.