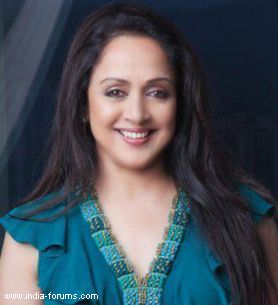 Actor-politician Hema Malini, the BJP candidate for the Lok Sabha polls, says her family members are very much by her side on her campaign trail and that her husband and actor Dharmendra will join her in Mathura soon.

She is upset by recent reports that her family has not accompanied her on her campaign trail, whereas her elder daughter Esha Deol was spotted campaigning for her recently.

"My younger daughter Ahana was here last week...Dharamji too will here in a few days. It's just I've asked them to join me in the later part of my campaign when the election fever heats up. No point in asking them to join me earlier," she said.

Hema Malini is amused as well as angry over media reports about her family's absence during these times.

"What purpose would it serve to have them around? As we speak, my Bhabhi (sister-in-law) is with me. Just because the local media doesn't recognise every member of my family, it doesn't mean they are not here to support me," she said.

Hema says attempts to portray her as the tantrum-throwing Bollywood queen are feeble attempts to discredit her.

"Nowhere have I shown any weakness or irresolution. Still my opponents talk of how distant I am from the local people of Mathura. Let the local people decide what they feel about me," she added.