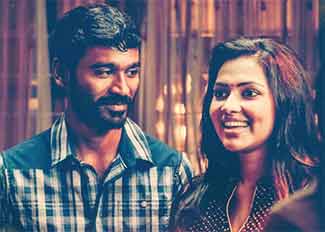 Tamil action-drama "Vella Illa Pattathari" (VIP), which is Dhanush's 25th film, has raked in a whopping Rs.19.08 crore in its opening week in Tamil Nadu, becoming the year's first blockbuster in the language.

The film, directed by debutant R.Velraj, was made on a budget of approximately Rs.5 crore.

"VIP has collected a staggering Rs.19.08 crore in its first week at the ticket window. Since the film had received a clean U certificate, it got tax exemption as well. This is turning out to be the biggest blockbuster in Dhanush's career," trade analyst Trinath told IANS.

Trinath believeS the Ramadan holiday will come in very handy for the film.

"Tuesday is a state government holiday for Ramadan in Tamil Nadu. VIP continues to do good business and it is expected to pick up in the next four days on the occasion of holidays. Since no other big Tamil film has released, it will continue to rule the boxoffice," he added.

Dhanush, who had also produced the film, had sold it to Madan of Escape Artists before its theatrical release.